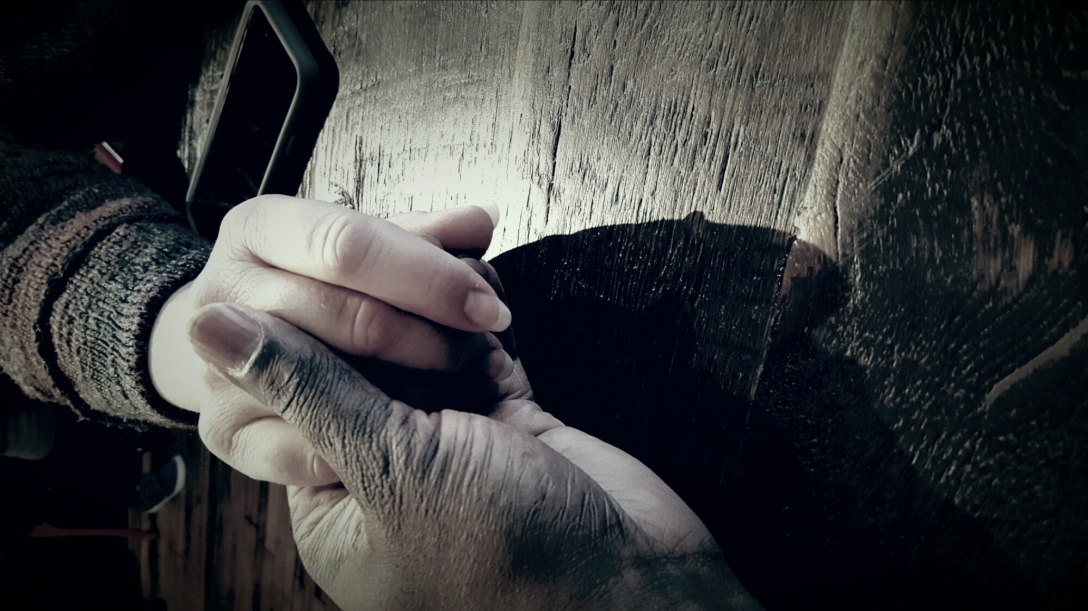 My wife is not someone who likes to have her picture taken often. I’m not quite sure why. She is a stunningly beautiful woman. But maybe I’m a bit biased. Regardless, I generally have to cajole her into taking photos with or without me. Usually I can use the kids as an excuse to get her on film. I knew the kids would be good for something eventually.

But sometimes — rarely, mind you — she acquiesces to a request from me to get a photo of her. She gladly wore my Ethiopian cross around her neck for a photo op once, and she good-naturedly allows me to post her photo here when I’m writing a blog that includes her. I am blessed for those moments.

The photo above was easier to obtain from her than many in the past because I didn’t even ask to get a shot of her face. I have always loved the contrast in our skin tones, hers ghostly white and mine a mottled brown. It’s stark, and I’ve always thought the perfect blending of tones when we’re side by side, in each other’s arms, or even “just” holding hands.

I realized we have rarely photographed ourselves holding hands, so what better opportunity than on a date? I can recall the number of actual dates we’ve had because they’ve been so few, and yet all were also so special. We didn’t have the traditional courtship so our dating life pre-marriage was rather spotty. We had our first child within three years of getting married so the in-between times are really what we had. So we’re making up for lost time.

We went out to eat a couple of months ago at a place I had never been to before. It’s called “Bite,” and it’s in Utica, so we met at lunch and drove down there to sample the food. The ambience of the place just begs for a photography session, and I took several pictures while we were inside.

This one is my favorite, though, because it shows the contrast I spoke of earlier, drastic against the dark wood of the table and the shadows our hand holding produced in its wake.