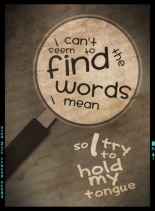 There’s this guy. I’m going to call him Ray. I try to avoid Ray like the plague. It’s not me being unfair, or judgmental, or anything. It’s just that Ray is one of those guys who just can’t stop talking, who can’t sense that I have places to be and things to do. So he prattles on and on about nothing at all. Seriously, the guy goes around in circles with his stories, like a dog chasing his tail. He likes to talk to me because:

So I’m guessing he feels some kind of connection with me, like we’re deep soul brothers or something. But the feeling is not mutual. Because every single time I see Ray means I’m going to be tied up for at least 20 minutes, unless I’m rude and cut him off before he really gets ramped up. I hadn’t seen him in a while, though, before today, but he was kind enough to enlighten me on the fact that he was:

He nodded at me when he said that last part. “Know what I mean, brother?” he said, but it wasn’t a question. With a nod of his head he told me that he put us in the same boat. I assume it’s because I was nodding along with him by that point. I only nod when I’m trying to move the conversation along. The nod means, “Yes, I know what you’re saying, and I feel your pain.” I had no real clue what he was saying, and I didn’t feel his pain, but my nod did.

And I wonder if Ray’s worked hard on getting his story down because it was pretty tightly woven together this time. Maybe he’s had time to think about it. Besides, the system was getting him down, but he seems to have risen above it all. At least that’s what he told me. They did a psych evaluation, and he passed with flying colors. Yeah, he’s feeling the best he’s ever felt.

But it’s a shame about Ray, really. Because the last time I saw him, about a year ago, he had the same rhetoric, and the same goals, and the same sense that he was about to turn the system on its ear. He’s not lacking in self-esteem or positive energy. He does seem to be lacking in finding a real way to change the cycle that he’s been in since I’ve known him.

It’s not just about Ray, though. It’s about all of us, fighting against the status quo, trying to find a way to get past it all, to forge new paths that have yet to be beaten into the forests of our minds. Ray makes me feel uncomfortable not because he’s a lost soul swimming in a fish bowl, but because he reminds me that I’m just as lost, only in my own way. He reminds me of a stark reality that I try not to think about.