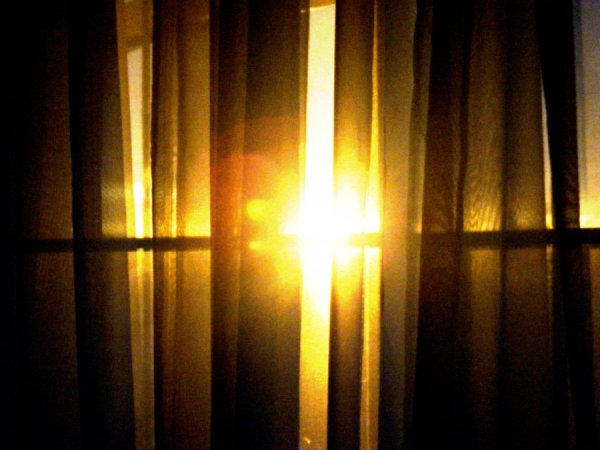 Some mornings are simply better than others. The birds chirp mellow, smooth, instead of high pitched and whiny. The coffee smells sweeter, infusing the air with the perfect hint of hazelnut, no more, no less. The bed feels warm, like a cocoon, enveloping me in its warm embrace. The children sleep in, so there are no interruptions, no screams, no yells, nothing at all. Just the sound of silence, and the steady breathing of my wife beside me as I hold her closely.

Some mornings I am in my thoughts, concentrating on what’s to come instead of on what has been, focused on the next thing. I am attuned not to the coming rain but to the storm clouds that are gathering, studying them for signs of early spring, or fading glory, or everything else and nothing else all at once. I stretch out my hand to feel the rain I know is coming, to embrace the coming downpour in ways I never have before. I flinch at its cold presence mingling with my own, and I close the window.

Some mornings there’s Ed Sheeran singing in my ear, reminding me that everything should be all about the rhythm. I sing along to the beat, knowing how close the lyrics are to my own life, to the words that would be in my head even if I wasn’t listening to it. I’m reminded that life, while solitary, is a shared experience, that others are listening to this same song right now, or ruminating on it in their minds, or lost in their dreams of it. Or songs like it. Or thoughts like it. And I smile.

Some mornings I am just so grateful for this life, for this ability to awaken again, to welcome the sun, the sound of the chirping crickets, the cold floor under my feet as I stand. The bed looks forlorn without me in it, with my wife still there steadily breathing, still fast asleep. I tuck the abandoned sheets and covers in around her, a poor facsimile for the warmth of myself, but it’s what I have to give when I have to be up and moving. When the night turns into day and I’m left staring at the thin line.

It wasn’t supposed to be this way, this waiting at a green light. And for what? I craned my neck to see around the SUV ahead of me, but I had nothing on which to focus my anger. I was just about to lay on my horn with gusto when I saw a man. It must have been like when the Jews saw Jesus walking on the water, except this man was in the middle of an intersection, and he certainly wasn’t Jesus. Oh, and he was dancing.

Earbuds in, swaying to the beat that only he could hear, he wore a leather jacket in 60 degree heat, oblivious to the elements. Oblivious also to the hard stares from the motorists who waited with hands raised above horns, with epithets painting the corners of our lips. We had places to go and things to do, and this man… well, he was standing there dancing.

I love to dance, to sway my hips to a particular beat, usually in the comfort of my own home, but this wasn’t the comfort of his own home. This was the streets of Utica, NY. This was rush hour traffic. Honestly, I’m surprised no one ran him over. If my kids weren’t in the car with me maybe I would have given him a nudge. Okay, I wouldn’t have. And he was an interpretive dancer too, the kind I usually like, but there’s a time and place for everything.

It wasn’t like this was some one man flash mob or something. It wasn’t like this was 2005 or something. A dancing man in the middle of the street against a green light for traffic… it’s just not done. At least not socially anyway. So we sat there waiting for him to shimmy along to what I could only surmise was a Gwen Stefani song, to reach the island in the middle of the street so we could safely pass and flip him off in the process.

Except no one flipped him off, this dancing man. Maybe because we saw in him a little of our own self-restricted selves, begging to slip free.

“I’m on my way. Driving at ninety down those country lanes, singing to ‘Tiny Dancer.’ And I miss the way you make me feel, and it’s real. We watched the sunset over the castle on the hill.” ~Ed Sheeran 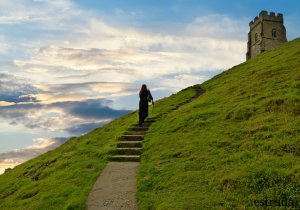 It’s no surprise that I like to sing. Check out my youTube channel I’m about to take down, and you can hear for yourself how freeform it truly is — kind of like my dancing. More often than not I’ll be singing my song of the moment, whatever song has struck my fancy that day, that week, or that month. Generally it’s a song I play a lot in my car, but sometimes it’s random enough to be maddening even to me.

Currently that song is “Castle on the Hill,” by Ed Sheeran, a soaring anthem that tugs at both the heartstrings and my legendary sense of nostalgia at the same time. I love the whole album (Divide) but something about this one song brings me back to my childhood in a way that few songs not from that era have the ability to achieve. At least for me.

Which is funny because I don’t really have a relationship to look at in the same way as he remembers one of his earliest. I was pretty much strictly friend material to girls back in middle school, even though I would pour my heart out to them in poems I never sent, in songs I never sang, and in words I never said face to face either. It was this dichotomy between the me I wanted to be — strong and determined — and the me I couldn’t help being — fragile and tentative. Like oil and water, they didn’t mix.

So I sang to myself, but my song wasn’t “Tiny Dancer.” It was more often than not “Broken Wings,” or “Get Outta My Dreams,” songs of lost love or unrealized love that resonated with the teenage me much more than anything by Prince or those other guys who sounded like Prince. I was a bit quirkier, preferring “Motown Song” over more sensitive fare.

But that’s always been me, my songs of the moment somehow connected to me in ways only I could ever figure out at the time, then moving on to the next song when my emotions have moved on. I do miss those songs when they fade from my spotlight, though, when they’ve gone back to their regular places on their own albums, when they’ve drifted from my mind like so much snow blowing across the boulevard.

“Do you beverage?” she asked me, and I said yes because I wanted her to think I was cool.

Six beers later I was tipsy, a bit off my game, so I admitted to her the only reason I said yes, and she didn’t laugh as I thought she might. Instead she took my keys and left me there.

It was cheap beer too. If you’re going to strike out with a girl, shouldn’t it at least be because of the good stuff? It didn’t really matter though. I was stuck at a club with no keys, a cheap beer buzz, and not much game. Just another Friday night.

I sat two stools down from the end of the bar, those kind of vinyl stools that look a bit like linoleum if you don’t look too closely. The club was called, appropriately enough, Vinyl, but the name was for the authentic DJ booth in the far corner, not for the hideous stools. It of course didn’t really matter. Before too long the club would go the way of the dinosaurs, like most clubs in Manhattan did.

Luckily I lived two blocks away, in a tiny walk-up squeezed between an all night pharmacy and a pawn shop that specialized in “The Best Prices For Your Gold!” So the issue of having no keys wasn’t really an issue when it came to driving. Unfortunately for me, getting into my apartment would be a bit of a problem, but one that I would gladly deal with in a few hours.

“I’ll have another,” I told Ray, the tattooed guy behind the bar, who seemed not to hear me, but only moments later a cold mug of Pabst Blue Ribbon slid into my hand.

I slapped a $10 on the bar and scanned the dance floor for another girl, any girl, or at least one who wouldn’t take my keys and leave me homeless. There were exactly two valid candidates who were ironically grinding on some douchy looking guys in the center of the parquet floor. I looked away. Maybe later they would pry themselves free from the attached appendages of those losers.

In the DJ booth an Asian guy in a backwards cap spun records like a pro, sliding effortlessly from old school to new school to everything in between, and I was impressed. Of course in a couple of months he would go the way of most DJ’s in New York — to the clubs in Jersey. It was a revolving door, and I’d seen way too many come and go just at the clubs uptown. I couldn’t even imagine how many moved through the seedier establishments in Brooklyn in the same amount of time.

Two more beers disappeared down my throat, warming my belly and fuzzing my brain even further. Odds were that Kelly was waiting for me back at my place. I think I told her where I lived anyway. She had seemed up for anything when she’d first posed the question, and maybe I was wasting my time hanging around a curiously retro club when I might have been looking at a sure thing if I just walked the couple of blocks.

Or, on the other hand, she could have been robbing me blind at that exact moment. She and a couple of burly friends of hers could be carting off my 52 inch TV right then, along with my collection of signed Yankees baseballs, and my shower curtain. Why my shower curtain? Why not? I had seen robbers take some crazy stuff before, and I wouldn’t put it past them to leave me vulnerable in that way as well.

I had just talked myself into heading back home to either get laid or to file a police report when a warm body slid onto the stool beside me, all perfumed and sweaty. The sickly sweet smells clashed in a comfortable way as I turned to take in the new scenery, a world of possibility that I hadn’t known existed even a moment before, but one that I was ready to take full advantage of… in the moment.

“Do you beverage?” I asked her.