Synopsis: Philadelphia. 1984. Kids play innocently in the fire hydrant. But nothing about inner city Philadelphia is innocent, as they will soon find out. Me and Ricardo is about shifting friendships and complicated decisions, about dealing with difficulties and making the best of bad situations. It’s about finding yourself in the midst of chaos.

Purchase Me and Ricardo. 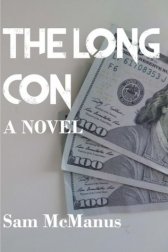 Synopsis: A girl shows up at Glen Davidson’s office, telling him a sob story about growing up without a father — the father he should have been. In a tale filled with twists and turns, Glen has to figure out if it’s true, or if he’s being conned for the money she also wants. The Long Con is a story of lost chances, of taking risks, and of embracing change, in a world full of doubt.

Synopsis: Life is a boring experience for nine-year old Jeremy Renton, a stranger in his own house, so he’s learned to head into the far reaches of his family farm, where excitement waits in the form of his bountiful imagination. But something happens out on that land that imagination can’t control, that shapes his life, and the town’s very nature, in ways that he never could have fathomed. In the course of a year things change immeasurably, causing Jeremy to doubt everything he’s ever known, as summer turns to fall, and winter looms on the horizon.

Synopsis: What would you do if you could live three lifetimes at once? For Andre Winters, this is a reality. Detours is the story of one man with real problems, struggling to identify himself through the relationships he forms with women, and ultimately finding a sense of solace. Taking place over the course of twenty-one years and three cities, it is the ultimate journey of self-discovery. Haven’t you ever wanted to take a detour?

Synopsis: Four bank robbers, one objective: get away clean. How far will they go to make it a reality, even with increasingly poor odds stacked against them? The bank robbery was the easy part, planned down to the last second, but the real story starts when everything falls apart. Mark Harris is the perfect criminal, but his reliance on others might just be his downfall. As the aftermath of the robbery leads to a full-scale manhunt, can he remain one step ahead of the pursuers? Secrets abound in the fast-paced world that this book inhabits, where death waits around every corner, and where contingencies become absolute.