Year 1 must have been fun. I was the center of attention, the new “bundle of joy” that burped, burbled, smiled, laughed, and occasionally cried. But there was nothing else that could compete with these dimples. Of course I don’t remember any of it. My mom says I was a little nightmare, but I’m going to go ahead and assume she meant perhaps toddler stage. At 1, I was a treasure.

I do remember year 6, and kindergarten, and making new friends. Okay, so there were really only 2 friends, but that’s 2 more friends than many others can lay claim to even now. Hmmm. Do I have 2 solid friends right now? But yes, in year 6 I learned how to tie my shoes, to count numbers, and of course the art of manipulation. I know I was fascinated with the shadows and light on the television screen back then. Maybe I still am.

Then there was year 22, which started off with a bang, even though year 21 ended so poorly. I’ll spare you the details, but suffice it to say I didn’t go through the rites of passage in quite the order they were supposed to be experienced. It was the first time I realized how stupid I was, how complex the world was, and how far I was away from the person I hoped I was going to end up being.

It was also the first time I realized time is finite, that I wasn’t going to live forever. Funny how much that realization changes everything.

Year 32 was full of so many new experiences too. I was a family man, and the family was finally complete, though at the time I thought there might still be a new addition or two forthcoming. On some level I’m glad that didn’t happen, because from this side of the glass everything is perfect how it is, but on another level I still held out hope for another seismic shift to the dynamic.

And now I am reminiscing on year 43, which was full of tradition, a lot of firsts, and just a warm and fuzzy feeling I haven’t had for a very long time. END_OF_DOCUMENT_TOKEN_TO_BE_REPLACED

“Dad, how is EPCOT different from the Magic Kingdom?”

“Well, I always think of it as the Magic Kingdom is for rides, and EPCOT is for walking and seeing what there is to see.”

“Characters! Characters as far as the eye can see!”

“Good, cuz there were hardly any in the Magic Kingdom”

Which was true, of course, though not too many people like to point that out ahead of time. If the Magic Kingdom is for inhaling the magic, then EPCOT is for bringing that magic to life and interacting with it. There were no fewer than 20 characters brought to life that we wanted to meet on that Wednesday when we rolled out of bed and got ourselves ready for Day 2 of our park journey. I’ll admit it was kind of sad to me that we would not be going back to the Magic Kingdom, but I was looking forward to the more expansive, more wide open EPCOT.

From the start, it was obvious it would be a different kind of trip that day. After parking in a smaller parking lot there was no need to ride the monorail as we were already there! Going through the gates was a much simpler process because there were fewer people and because we had gone through the procedure with the magic bands a couple of days before. We were veterans by that point, grabbing the wheelchair for Madeline and getting moving right away. Straight off I saw Pluto chilling, taking pictures with newly arriving guests.

It was a sign of things to come. After he put his paw over Alexa’s face, and we all laughed, we took a few pictures, he signed the girls’ autograph books (on his nose), and we took off for one of only four rides we would go on that day: Spaceship Earth. END_OF_DOCUMENT_TOKEN_TO_BE_REPLACED 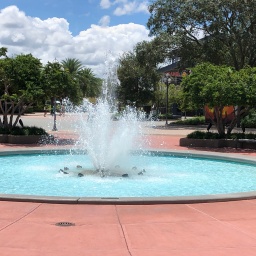 I have to say that when I woke up that Tuesday morning I thanked my wife big time for scheduling “break” days within our Park program, because my legs ached, I was exhausted mentally, and so was everyone else after the chaos of the Magic Kingdom deep into Monday night. It was the equivalent of working hard on your feet all day, knowing you have a relaxing weekend to look forward too — except that the “work” was one of the most amazing days of your life.

If there are any big takeaways I can give from the Magic Kingdom, these are they…

But that was over, and as much fun as it was, we wouldn’t be headed back there on this trip, so I hoped the kids had enjoyed the park as much, or hopefully even more so than we did. All the pictures came up within minutes on our Disney app, which was fascinating too, because we were chronicling the trip step by step along the way, and it was visual to everyone. We spent some time on Tuesday morning scrolling through them and recounting memories we had of the day. END_OF_DOCUMENT_TOKEN_TO_BE_REPLACED