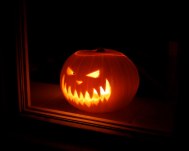 The holiday was never one I really followed when I was growing up, coming as I did from an ultra-religious family where to speak of ghosts was tantamount to swearing. Indeed, even the classic cartoons giving homage to All Hallow’s Eve were banned from our home. The night itself was rife with little hoodlums scattering near and far in search of candy (the treats), or ways to deface houses and property (the tricks).

In our house we were always in well before nightfall, and the night was treated like just another night, with family games, wholesome television shows, and an early bedtime. The next day was always interesting, though, because some of the kids at school would have plastic baggies chock full of candy, and they would taunt those of us who had nothing. It made me a bit jealous to see them lord it up over us but my mother always told me all candy did was rot the teeth, and did I want rotten teeth? I most decidedly did not.

As the years went by the jealousy passed into the ether for the most part, but on occasion I would still see those kids wandering from door to door and wish I were them. But my mother was unrelenting so I stopped asking and decided it was my lot in life. Eventually, though, when 11th grade rolled around I guess Joy and I were old enough to make our own decision. Of course the irony of it all was that by then the novelty of the experience had mostly worn off for other adolescents. Teenagers were buying their own candy, or just trashing yards and egging houses instead of lugging baskets from door to door.

But we decided to go for it anyway — me, Joy, and our friend Karen — rather spontaneous that year. You see, we were supposed to be heading to the church basketball game at our old elementary school. Rather than going straight there, though, we had our other friend drop us off 10 blocks away, and we followed the kids around Mt. Airy begging for candy. First, though, we had to make ourselves legit, and we all happened to be wearing ballcaps, so we called ourselves the Hat Squad. Then, at the first house we “hit,” the nice lady gave us all plastic shopping bags. And we were in business.

That remains the only time I ever went trick-or-treating in my life, at least for myself, and the memories of it were totally worth the wait, and the subsequent absence of it. Perhaps that’s all I needed, to know how it looked from the other side, just that once, and it was enough. Besides, going as an 11th grader was kind of hip in a weird way, but going as a 12th grader would have just been creepy. All I know is that the candy we got that filled up our plastic bags tasted better than any other candy I’d had before or that I’ve had since. END_OF_DOCUMENT_TOKEN_TO_BE_REPLACED

My recent trip to Philadelphia gave me a greater appreciation for its architecture and ambiance. I took a lot of photographs of the experience, of the moments strung together and separate that to me made up the City of Brotherly Love on this journey, the ones that also spark up nostalgia. Here they are, in … END_OF_DOCUMENT_TOKEN_TO_BE_REPLACED

We took the long way back to Joy’s apartment, traversing Rittenhouse Square and tiny streets that have been pretty much the same since our founding fathers walked them in the 18th century. The cobblestones are worn thinner than they were back then, though, and the UPS truck at street’s end also shattered the illusion, but … END_OF_DOCUMENT_TOKEN_TO_BE_REPLACED

Even though we had gotten to bed pretty late the night before, my body betrayed me by forcing me awake at 6:27 on Friday morning, the side effect of normally getting up early for work (and of having young children). Of course my sister has no such internal alarm clock, so I was on my … END_OF_DOCUMENT_TOKEN_TO_BE_REPLACED

I guess it was one of those things I took for granted coming from Philadelphia, that feeling of culture and grit tied up and twisted together into one beautiful… thing. And we spent too much time at the end living in the suburbs, that place we called “Almost Philly” where everyone dressed the part and … END_OF_DOCUMENT_TOKEN_TO_BE_REPLACED

Dear Journal, It was quite an experience driving home today from Philadelphia by myself. The car is usually so full of noise on that trip — the sounds of iPad games, of videos, of music through the stereo speakers, and of off-and-on conversation — that I can’t hear myself think while I drive, but this … END_OF_DOCUMENT_TOKEN_TO_BE_REPLACED