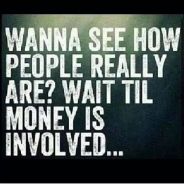 Love is a broad term. Some use it quite liberally, to encompass everything from tacos to their grandmother, while others quite specifically only say love when they mean the romantic kind. I guess when I see the word love I immediately think of family, but I can truly say that there are other things I love. Money just isn’t one of them.

Let me back up. I appreciate money. I covet it. I want more of it. But not because of the money itself — instead, it’s the power that money represents. I love power, and there’s a thin line between money and the power that can come along with it.

I’ve spent the majority of my life without so much as two nickels to rub together at any one point in time, living paycheck to paycheck and hoping a job is just around the corner when the previous one comes to an end. On the rare occasion that I’ve had more than a small amount of money at one time it hasn’t been about stockpiling it. It’s always been about supporting my family.

That’s what I think is the real difference between money, and the love of money. I would never roll around in a bed full of hundred dollar bills for fear that I would inadvertently lose on in the frolicking. That hundred dollar bill could be a year’s worth of milk for my family. Yes, that’s the difference. I don’t love money. If I could get those necessities and support my family without it, I would be just as happy. 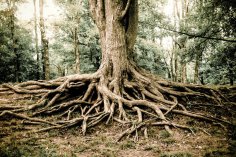 Money is as money does, to loosely quote Forrest Gump. It’s a means to an end. That’s one reason I would worry if I hit the mega jackpot or received an 8 figure bequeathing from a long lost relative. Because I could with that kind of money easily take care of my family and still have a king’s ransom left over. With that kind of money I could fall in love, quite easily. I have an addictive personality, so I know I would develop an unhealthy attachment to having and maintaining it.

So I guess I agree that the love of money can be the root of some evil, but all evil? Too many horrible things happen in this world that have absolutely nothing to do with money, but everything to do with the depravity of human nature. Too much goes on that speaks to deeper levels of evil that money cannot touch. While I get the overall issues that can be associated with having “too much” money, the “mo money mo problems” scenarios that have cropped up all too often, I can’t make that blanket statement.

It’s not money, but how we deal with it, the true value we place on it, that really matters. Evil is as complicated as love, with many entrances and many hidden hallways to it. The love of money can be one of those conduits, but it is certainly not the root.

5 thoughts on “The Root of All Evil”