I am naturally a hoarder. No, not like that guy who stacked 50 microwaves floor to ceiling in his basement. And definitely not like that woman who has every People magazine since the 30s collecting dust in her attic. But you know the people who stockpiled canned goods in the ’50s to put into their bomb shelters? I’m like them.

It started innocently enough at Target one day. I was searching for laundry detergent and I saw this sign that said… 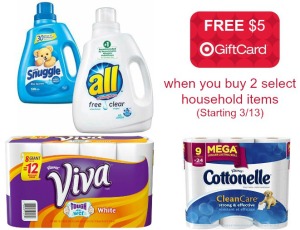 I can’t tell you how badly that sign made me want a $5 dollar gift card. It was like the card was hovering there in the air in place of the sign with the picture of the card, waving me home, a screaming third base coach who knew how fast I was and wanted me to score. So, even though I only needed one container of laundry detergent, I came home toting six of them, my wallet poorer for the enterprise.

But I proudly held up three $5 dollar gift cards and fanned them out for my wife to see when she got home that night. I was ecstatic… until she gave me the blank look, the one that says, “Why the damn hell did you buy so much laundry detergent?” Apparently she hadn’t grasped the enormity of what I had just accomplished.

“But babe, look at these gift cards!” I told her, waving them around, tossing them in the air like I was letting it rain at a strip club. Okay, maybe that was the wrong thing to do because once they were no longer in my hand the look deepened.

“You could have spent that money in a better way,” she said, and I was crestfallen. I scrambled to pick up the gift cards and tuck them out of sight. I thought to myself, “Maybe I should have just gotten two.”

But in time I think I convinced her that the gift card can hold a lofty place in the annals of spendthriftery if given the chance. Because that was just the beginning of my philosophy that, “If it’s something we will eventually utilize, why not get it now at a discount?” 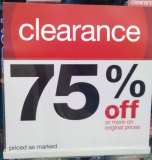 This philosophy began to take on a mind of its own when our youngest child was in pull-ups and the size she wore suddenly went on 75% off clearance. The day it happened I watched the workers slap red sticker after red sticker on package upon package. When I asked them why it was suddenly Christmas they told me about the 50+ more packages in the back that they would be ticketing later.

OMG. I was in heaven. To get those usually expensive pull-ups at such a discounted rate was something I had only dreamt of until that point. I immediately texted my wife (she of little faith) and told her the mind-numbing news, so drunk was I on the amount of savings that it was difficult for her to make out my actual meaning through the mounds of autocorrect fodder I sent her in those first moments.

But, glory be, she sent me back the missive I had initially expected after the laundry detergent coup:

“Get every single one you can shove in a cart!”

She didn’t have to tell me twice. I was already moving before I even read the last few words, so intent was I on making sure the secret remained mine at least until I had loaded my cart, as I had been instructed to do. Package after package of pull-ups made its way into my cart, dominoes tumbling one after another until it was indeed full. Sure, the price tag was pretty hefty as the cashier rang me out, but looking at the amount of savings was enough to make me giddy once more.

Time and again I’ve taken advantage of these kinds of deals, buying multiples of items I know we will eventually use, and storing them up hoarder style somewhere in the house. I often look them over before the pile inevitably goes down, smiling to myself that I was able to make out so well. The list goes on, from deodorant, to lotion, to baby wipes, to dish detergent, to everything in between — even bread.

Price Chopper had this deal on bread where if you buy one loaf you get two free, but they only let each customer get three of these deals per week. My wife and I came up with a plan. First we bought a standalone freezer (it would be worth it for other frozen deals in future). Then I went to the store and purchased the three loaves, juggling nine out the door and into my car. The following day my wife headed off to the same store, bringing home an additional nine loaves.

We froze all but one loaf of that bread, ecstatic that the other seventeen were safely tucked away, nearly filling the standalone freezer. Three weeks later, when the same deal once again made itself known, back we went, one by one, to Price Chopper to replenish our freezer stash. I finally made a believer out of my life partner, and it was a good feeling.

The freezer has just about paid for itself in free bread by this point. Maybe I have a problem.

One thought on ““I Have More Than One””