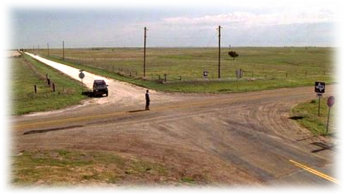 I remember in that movie Cast Away, at the end when Tom Hanks’ character should be happy because he has escaped the island, but he’s not because the woman of his dreams has made her choice, and he isn’t it. He accepts the loss with grace, but you can tell that inside his heart is breaking. And he’s at this crossroads in his life that is symbolized by him standing in the middle of an actual crossroads, having to make a monumental decision that will affect the rest of his life, or at least the rest of his day. Where should he go?

And when I saw that movie I couldn’t help but feel that he gave up too soon, that even though the woman of his dreams had moved on with another guy, he should have fought for her. I saw them standing outside of her house in the rain and my heart was breaking too, because I’ve seen that scenario before. I’ve lived that scenario before, when life was at a crossroads, and it was her decision, and she made it, and my heart broke.

I felt that my life was over, but in reality it had only just begun. She made her choice at her own crossroads, which created a choice for me. There was no chance to go backwards, but everything else was wide open. I recall thinking about how ironic it was then, that the choice I wanted to make was the only one closed off to me, that there wasn’t really possibility in the other ways to go. I was stupid because I was blinded by a love that refused to let me go.

So I went forward. I didn’t turn left because I knew that way led to regret, to torturing myself with the memory of what might have been. I didn’t go right because I knew I wasn’t the kind of guy who could drown his sorrows in a series of meaningless relationships, at least not if I wanted to heal, which I did.

So I went forward into the unknown, trying to cling to a hope that things would get better, that I would find myself again, whatever that meant. And I have, the choices I made somehow bringing me out to the end of a road I never knew even existed before. That’s the glory of life, and of the choices we make when we’re forced to make difficult choices.

And I’m no longer yelling at Tom Hanks’ character to go back and fight for his woman, because she’s not his anymore, and he’s not hers, and going back doesn’t help anyone move ahead to where they’re supposed to be.