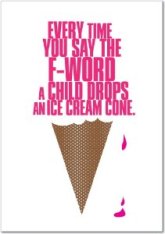 I said the F word in class the other day,  because a story I read to my students utilized it. It wasn’t just there as decoration, as I often see it, not merely masquerading as an adjective when another word would have been more appropriate. It was an exclamation of sheer despondence. And that’s just fine. Only, not around my kids.

I rarely use the F word, unless it’s in an aforementioned reading during class, or if it’s in the lyrics of one of my favorite gangster rap songs, or I hit my thumb with a hammer. But I hardly ever use hammers (1998 comes to mind), I only sing gangster rap when I’m alone, and only sporadically does that word show up in my reading material for class.

But somehow a couple of years ago my then 8-year old used it in school. I have absolutely no idea where she got it from, and I was mortified when they told me it was her, and what she said. When asked she had no recollection she had even used such a word, had no idea why we were making such a big deal. But it is a big deal, because words have power, especially that one, even these days.

Time was when the F word would elicit a reaction from everyone in the room, when every PG-13 movie didn’t include it as an afterthought. But that time is long past, and that word doesn’t hold quite the connotation it once did… to many people. To me, though, it is just as harsh to hear as it ever was. That was the point of it after all, to stop people in their tracks, to make them take notice.

Now everyone uses it. It’s become interchangeable for so many other words, probably because people these days don’t feel the want or need to obtain a larger vocabulary, and

thus have multiple ways of getting their point across without swearing. It has become the ultimate placeholder, a bitter commentary on the state of our world, and on the state of language itself.

Since that time in class I’ve used the word three times, two of which were in private, and the other was when it was just me and my wife in the room. Oh yes, and I wrote and performed a poem about it in front of about 30 people a couple of Thursdays ago too. You could say I’ve been a bit obsessed with the overuse of the word for a while now, and I was inspired to write a poem where nearly every line had the F word in it, to show the idiocy in relying on that word and that word alone to get across every point you ever need to make.

It was well received, by the way, the poem, but I’m not quite sure why. Perhaps those in attendance got my real point, but I worry they liked it because they got to hear the F word about 30 times in a 40 line poem. And you want to know something? Each time I arrived at it one more time I had to gear myself up to say it, to let it come forth from my mouth. Because I’m still not used to it.

And I hope I never get to that point.