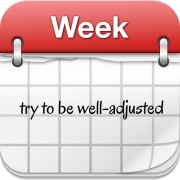 “If this week had a theme to it, what would yours be?”

In upstate New York on a Thursday night the protagonist slides into a hot bath instead of going to a poetry reading. He has gone back and forth all day debating the merits of each, but the bath has won out after going nonstop all day with various projects, teaching class, and shopping with his family. His glasses are on the small bench near the tub, but he cannot see them because of the steam and his near-blindness. It’s okay, though. For the next 30 minutes he won’t need them. All he needs is his warm thoughts and his aching bones crying out for relaxation.

If this week had a theme to it, it would be “protagonist faces a new world and adjusts accordingly.” Or maybe it’s not the world that’s new. Maybe it’s the protagonist after all.

Today was one of those “good” days. You know the kind, when things work out exactly the way they were planned, and you’re so surprised because that’s not the general case, especially around here where everyone scatters and everything goes awry. But today others could be counted on to play their roles as scripted, the general malaise of this time of year happily replaced by a light rain that hinted at fairy dust somewhere around. Oh how I love fairy dust.

So our protagonist unwinds after a long, glorious day with a bottle of wine (uncorked and at the ready), with his eyes closed, and with scented bubbles to help him relax. He smiles to himself, the private jokes all adding up to a blissful release, and he hopes this never changes. He could get used to it, which scares him more than he cares to admit. But he blocks it out for the moment, mesmerized by the shadows that cross his closed eyelids, thinking about tomorrow.

And the tomorrow after that.