Okay, I made it this far, I guess it’s okay to go all the way. My name is Sam. And I’m addicted to Scandal.

Now, before you judge me let me tell you the whole story. For years I declared the show too frivolous for me to pursue, while I watched other programs more geared to using my brain, shows like Fringe and Elementary. But somehow, written across the margins when I was watching other programs on Netflix, or on commercial teasers, I couldn’t help but still be inundated with the show I had sworn not to watch.

Then a friend of mine started watching it and dared me to give it a shot. If you don’t know me very well, let me tell you I’m a bit like Marty McFly. I’ve never met a dare I didn’t think was worth the effort to take on. So I signed into Netflix and I watched the first episode. From the outset I was hooked, like a junkie taking his first hit. That initial episode blended into the next, and before I knew it the first season was over, and I found myself arguing with the TV. “Are you serious?” I asked the oblivious characters when they made stupid mistake after stupid mistake. 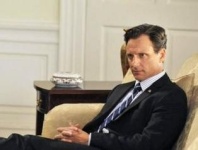 Yes, I know it’s all just smoke and mirrors, what passes for this decade’s nighttime soap opera, like Dynasty and Falcon’s Crest before it, but that doesn’t stop me getting invested. I marvel at the characters who look the other way when things are happening right in front of their faces, at the ones who continue their patterns of behavior that I know will lead them into trouble later in the season, and at the ones who need redemption more than anything else but who will probably never get it. I watch because I know these characters.

The characters on Scandal are people I’ve gone to school with. They’re co-workers and former bosses. They’re family members and acquaintances. They’re people I’ve been before, and people I have the possibility of being before all is said and done. They live and breathe just like people in my life. They have their own issues and problems like real people do. I can just follow the plotline better with them, and for that I’m grateful. Somehow these characters and this fictitious world has captured the zeitgeist of what the real world might truly be in the shadows, and that’s its appeal right there.

So yes, I watch in bunches, quite voraciously when I get the chance. But don’t judge me because we all have our guilty pleasures, don’t we? Well, don’t we?

One thought on “Scandalized”