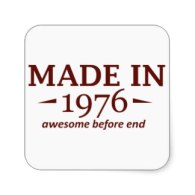 When I was 10 I thought 38 was ancient, that the space after 35 was inhabited by ogres and old people, and that if I ever got to that point someone should probably take me out behind the barn and put me out of my misery. I would see people on the streets and shake my head, knowing that if they weren’t already at that point that they were getting there soon. But one thing I knew for certain was that I would never get there myself. You see, when we’re 10 the world is such a small place, and time is such a vast concept that we can’t quite wrap our brains around it. When we’re 10 we think about forever being 10, not growing older.

But I didn’t stay 10 forever. I kept getting older while the world got larger and time began to shrink. As I motored past 20 it was about shaving and parties. Then 25 came and I noticed a few aches and pains that hadn’t been there before. That’s when I noticed the people in my life who were past 35 weren’t that far away age-wise from where I myself had gotten to, and that woke me up to an extent. Once 30 was in the rearview mirror I began looking at the mirror more myself, noticing the gray hairs that had started to creep in and that were trying to take over. Then 35 hit hard like a hammer slamming against an anvil, and I woke up with a start.

Either I was an ogre or I was {gasp} OLD. I think at that point I preferred the ogre.

Now, don’t get me wrong. I didn’t think of my parents or other relatives in that way. They were simply themselves — ageless in my book — and defied characterization. However, everyone else was fair game, and as I hit that magical number myself I began to notice those who were younger looking at me the way I used to look at “old people.” It was a mix of pity and awe: the pity because I was old, and the awe because somehow I was still walking around and talking to others. Yeah, the ogre seemed a lot more humane when I started noticing those looks.

Then I saw signs saying “40 is the new 20,” showing photos of women who were apparently 40 but who looked 30, as if we could bend time back around and get younger Benjamin Button-style without fading away. But I would look into the mirror and I wouldn’t see 10-year-old me with the wide open world view and the judgmental glasses. I would see 35-year-old me with a little extra weight on the mid-section and with the crinkles around my eyes that showed wisdom as well as age. It was as though 10 had been just a mirage. I would look at the young kids as I passed them and shake my head in wonder that I was ever that age, that I had ever thought like that about aging, about the myth of 35.

Now I’m 38, and I’ve only been 38 for a few hours, but I know what it means now. It doesn’t mean I’m an ogre or that I’m an old person. It means I’ve gotten older, for sure, and it means that I do have more aches and pains now, but they’re war pains, the result of a life lived, and still being lived. See, I don’t want to be taken out behind the barn and put out of my misery now because life isn’t misery. Sure, it can be tough sometimes, and the years have taken a toll on me physically and emotionally, but it’s all part of me now. That’s what 10-year-0ld me could never have understood, that getting to and past 35 means knowing yourself more, means learning how to be content with aging because it’s not going to slow down.

And yes, those ogres might still look enticing from time to time, but they’ll never be me. I’m simply growing older.