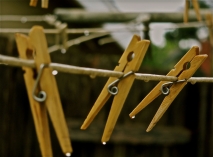 I was getting proactive. I swear I was. The clothes had been washed, and instead of tossing them into the dryer I hiked all the way outside to put them on the line. You see, we have a clothesline out in the backyard. It consists of two sturdy posts with a snaking line of rope that stretches tautly between them, creating five (or six) parallel lines. That way I can hang multiple loads out at the same time, an ingenious idea that I did not come up with.

So I got the first load out, and the weather was fully cooperating, with each article of clothing blowing in the light breeze. The better to dry them by, my dear. The second load followed the first about 45 minutes later as the wind had picked up a wee bit in the interim. There were probably no less than 30 clothes hanging on the line by that point, and a third, smaller load came out of the washing machine an hour later.

The first load was mostly dry, but needed about 20 more minutes to assure they were truly dry, so I left them out. I gazed up at the sky after hanging the third load up, and it looked exceedingly clear, even though the wind had begun to whip itself into a frenzy in the late afternoon atmosphere. So, I headed back in.

Then the deluge began. No sooner had I sat down on the couch to watch some tennis when the skies opened up and water began streaming down as if from a faucet turned all the way to the left. I guess God was trying to get ready for a bath, but it took me a moment to register what was really going on. When I finally did I swore, jumped up from the couch, and tore outside. I probably would have given Usain Bolt a run for his money at that moment, skidding out the door into the downpour to rescue the clothes.

By that time, of course, they were getting soaked, and so was I. A second after I walked out the door my glasses were completely useless, which meant my eyes were too. I was basically a blind man weaving madly around the clothesline grabbing clothes left and right, tossing them into the basket, and hustling them inside. I went out there six times in order to get all the clothes. By the time I came in after that sixth trip water was streaming off of my nose, coming off of my shoes, and my own clothing was soaking me to the skin.

And the whole time my eight-year old daughter was laughing at me. I don’t just mean small chuckles either. These were full belly laughs that shook her little body until I could have sworn she was having a seizure. I did not find it humorous. I ended up having to change all of my clothes, drying my hair, drying my hair again, and throwing the clothes that had been on the line in the dryer after all. To add insult to injury, Alexa never let me live it down, claiming she knew it was going to rain (but she somehow never shared this nugget of information with me).

It had finally started to die down as a source of mirth when, a couple of months later, I did it again. Yes, you heard right. I somehow managed to miss another sign of an impending storm, and ended up having to run out to rescue the clothes yet again. And if anything, I think it was raining even harder the second time. Maybe I’m just not meant to save energy by using the clothesline.

4 thoughts on “Weather or Not”