“Oh, I know that this love is pain, but we can’t cut it from out these veins, no.” ~OneRepublic

I’m in pain. I guess it’s time I admit that to myself after all this time. Because I’ve been in pain for a very long time. Because I channel it differently, though, it wouldn’t have been easy for you to see it. So I don’t blame you for not noticing. I blame me for being that good of an actor. But every actor has to leave the stage at some point, and this is my time. Because I’m in pain, and I need another outlet.

My father had a stroke a few days ago, and the news of it hit me like a sledgehammer, but that is not the pain I spoke of before. That pain came a long time ago, when he disappeared from my life. Don’t get me wrong. I’m not exclusively blaming him — far from it. I’m taking responsibility for my own part after the fact. It cut me to the very core when he left, when he took off, first emotionally, and then physically. But I smiled. I said I would see him soon, that I would visit often, and he said the same.

That didn’t happen, for many reasons. Then my life happened. It exploded into many different offshoots, and I was able to bury myself in all of that, to hold my breath while he did whatever he was doing. I don’t think any of it would have mattered, because it was obvious he too had moved on, that the mantle of father was a coat he wore twice a year. It was like the act of moving on physically was the dividing line. There were no longer any excuses to pretend a relationship.

And I hurt. I hurt because I depended on him to make those things right, because to me it was a two-person effort and my mother was straining at the seams doing everything for us, as she had always done. I hurt because it seemed like no matter how many times I called him, how many plans he made for coming up, that nothing mattered. Because there were always the excuses, the other things that materialized that were more important than me, that were more important than us.

All this while I burned inside. Not a white hot anger, but a slow burn, a crackling and withering heat that turned that part of my heart to ashes.

“I know you’re feeling insane. Tell me something that I can explain.”

What hurt the most were all the promises. Perhaps if he had just left it alone, if he had allowed me to stop missing him the wound would have been cauterized, cut off from that part of me that mattered. But he couldn’t bring himself to go that way, to allow me to stop hoping, which was so much worse. And I guess I was always a glutton for punishment because I would put my misplaced faith in him time and again. I opened the door time and again, just to have it closed once more in my face.

So this stroke, the call that told me the news, it hit me just as hard as if I had seen him yesterday. Because even now I can’t close off that part of myself. Even now I see a reunion where he will realize how much he misses me, where he will become that perfect father I always wanted him to be, or at least a reasonable facsimile of such. Even now I have these pie in the sky ideas of what my father should be and could be, those old wounds once scabbed over bleeding again. 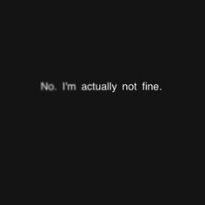 Someone asked me how I feel, and the word that keeps coming back to me is confused. I guess I didn’t realize how much I still want those things, how much I felt I had closed myself off but I really hadn’t. When I thought in that moment that he could have died, that he could still die, it hit me hard like concrete. And this pain, I realize it will always be with me. I will always hurt when I think of those wasted years, all those missed opportunities, all the excuses and misplaced trust.

Because I love my father. After all of this, after all this time, I love him. Maybe it’s because I’ve been conditioned by society to love him, or maybe it’s just that’s part of my nature, or maybe it’s even as simple as biology. I don’t know, and I guess in the end it doesn’t even matter. My heart broke when I got the news, which says something more profound than words and contrivance ever could.

So this pain, this hurt that I’ve lived with for three quarters of my life, it’s here to stay. It means that I’m still alive, that I have a lot to be thankful for, but that my life is not securely mine, that it belongs to this heart of mine too, and to the people who fill it, for better or worse. He’s hopefully coming home from the hospital today, and I will be trying to find a flight to get down there, because that’s who I am.

And life is too short. So let’s hurt tonight.