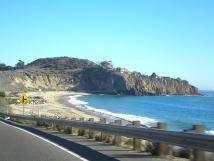 2Pac’s “California Love” blasting from its subwoofers, the SUV roars down the Pacific Coast Highway, doing eighty in a sixty-five, its windows vibrating from both the acceleration and the sheer wall of sound. Andrea sits in the back seat on the passenger side, lost in her own world, caught between the wreckage of her relationship and the promise of a brighter future her friends keep trying to convince her is just over the horizon.

They are on their way to Pasadena for Spring Break, the four of them, but it doesn’t promise to be a paradise. In fact, Andrea is quite sure it’s going to be the worst week of her life, because her ex, Jeffrey Montague, is sitting in the seat directly in front of her. They had made the plans before the breakup, and a lot of money was tied up in it. Phrases like “being adults about it,” and “moving on in a healthy way,” have personally strapped her into that seat, and now she’s stuck there.

“Out on bail, fresh out of jail, California dreaming…” raps Carl from the driver’s seat, at the top of his lungs, and totally off beat.

“It’s funny how you think you’re all roughneck,” says Amy, kicking the seat in front of her. “When we all know you’re a Valley boy with a bank account and a Lexxus. You probably don’t even know where the jail is.”

“It’s in Culver City, and I’m as roughneck as they come,” Carl replies, throwing up a peace sign and stepping on the gas. The car jumps to eighty-five.

“If you think roughneck is knowing all the lyrics to 2Pac’s sorry catalog, then I feel bad for you,” Amy says, laughing.

“Shake it, shake it mama. Shake it Cali,” Jeff chimes in, gyrating his hips obscenely to the infectious beat.

In that moment Andrea knows she hates him, that every single ounce of love she used to feel has oozed out of her pores like so much sweat. It’s not just the song lyrics either, or even the hip tango. It’s the attitude that was hidden for so long but that has emerged big time over the past couple of months, making it impossible for her to remember his sensitive side. She closes her eyes and tries to block out both the noise and the memories.

It’s only an hour into the four hour trip, and she’s already regretting her decision to travel with the gang. After all, Amy and Carl were Jeff’s friends first. They have no loyalty to her, and everyone knows it, but they both begged her to come along. She now knows it’s because they didn’t want Jeff to end up being a third wheel, and she allowed them to wheedle her into adding her fourth wheel to the equation. It helped their cause that the deposit was non-refundable.

“Where are we going anyway?” Andrea asks in the pause between songs, directing her question at Carl’s back.

“Pasadena or bust, baby,” he says, which means absolutely nothing.

“The Flats,” Amy adds. “It’s a little hike, but the view is incredible from the top. It’s like a gigantic table up there. Perfect camping area.”

Andrea hates camping. It was always something she did because of Jeff, and this trip was never going to be a joy for her, but even the trip there has become a microcosm of their entire relationship. His friends always dominated his world, the sidekicks to his alpha male personality, and they always took center stage. Sometimes Andrea had wondered if a girlfriend was even what he wanted, if his friends weren’t just enough for him. Which would have been fine if she had never existed in his world, if he had never asked her out and made her feel like he wanted her more, at least initially.

“Me and the homies smoking roaches, cause we broke…” yells Jeff as they speed across one of the million bridges that populate the southern California landscape.

They are two of the whitest boys she knows. She remembers meeting Carl first, back in sophomore year, Marketing 102, and people were calling him “Ghost.” Andrea found it hilarious when she discovered all he listened to was gangster rap, and mostly 2Pac. It intrigued her enough that she had to find out more, so they became friends, he introduced her to Jeff along the way, and the rest is history. Oddly enough, she doesn’t blame Carl for the intro, or for what eventually happened with Jeff. She blames herself for everything.

She puts on her headphones, some Beats knockoffs, fishes out her phone, and tunes in her Sarah McLachlan Spotify playlist, tired of all the 2Pac that is still shaking the car. Cranking up her own volume, Andrea can still hear the urban poet in the background, but he merely provides a remix flavor to one of her favorite artists, someone she hasn’t listened to nearly enough lately. Closing her eyes, she sinks into “Building a Mystery” like an exhausted woman into a hot bath.

“You live in a church where you sleep with voodoo dolls. And you won’t give up the search for the ghosts in the halls…” croons the chanteuse over the background of 2Pac’s “If I Die Tonite.” It is strange and yet appropriate at the same time because it succinctly symbolizes why her relationship died. They were too different, and there is some truth to opposites not attracting. Or better yet, they attract for a time, and then they repel, like magnets sliding over and around each other.

In that moment, when the sonic dissonance threatens to overwhelm her with its extreme relevance, it also squeezes her in its arms like a long lost lover. They are heading to Pasadena, to a place flat as a pancake, to a future that no longer fits her, but she doesn’t have to deal with it, not anymore.

No matter what you have been through in your life, you can feel better again