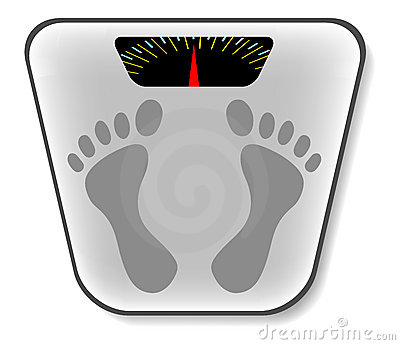 The truth is that I’ve been avoiding the scale. I know. How could I? But I knew it would flash numbers at me that I wouldn’t like. And when I went to the doctor’s office they weighed me in kilograms. I never ask what that translates into in pounds because I don’t want to know. It’s convenient that way. But late last week I had to come face to face with the truth. I weigh 260 pounds.

I don’t remember ever weighing this much before, which means nothing because I’ve often avoided the scale throughout my life. This isn’t some recent phenomena. But I do know how I look when I take a picture, and I’ve noticed that full body shots aren’t as flattering as they used to be. That doesn’t mean I’m fat. I’m just a bit more pleasantly plump than I used to be.

The last time I realized I weighed a lot I decided I would work on my portion sizes. My doctor concurred. He said I was 20 pounds away from my ideal weight then, for whatever that’s worth. I’ve never quite understood what an ideal weight is, some arbitrary number supposedly calculated by body mass index, etc. from others who were my same height? Or something else entirely?

So I knew I wasn’t ideal, and I switched up my portion sizes, cutting down on what I was eating and how much I was eating. It worked, to an extent. I dropped about 10 pounds in a few months, and I thought I was on the right road. But just like with anything else, I slipped back into my own words. Another two slices of pizza? Yes, please! Do I want an extra couple of cookies? Sure thing! Before I knew I had regained those 10 pounds, and then some.

About a year later I saw another doctor who told me I was again about 20 pounds away from my ideal weight. I was sitting at 250, and my ideal body weight, according to him, was 230. He said the extra poundage was affecting my joints and my overall body health, and I took him seriously, just as I had the previous doc. This time, in addition to my portion sizes, I forced myself to eat more of the green stuff and less carbs. Oh, and I began exercising.

It was simple exercise at first, helped out by the new Wii we bought that Christmas. There was this dynamic program that would keep track of my exercise regimen, AND create new ones for me when I tired of the old ones. It was called Wii Fit, and I was hooked because it was fun to watch things change. I began regularly weighing myself using the program, and plotting in goals along the way to getting healthy and dropping those pesky 20 pounds.

Eventually I got down to 235, but I felt weak an awful lot, particularly after a workout. I just wanted to suck down everything I could get my hands on. I knew that wasn’t how I was supposed to feel, finally down so close to my ideal weight. Then something major happened in my life and my exercising went down the drain. I stopped cold turkey, and my weight began creeping up again. 240 – 250 – and now to 260.

I know I don’t eat as healthy as I used to back when the first doctor scared me, or even when the second doctor made me sit up and take notice. But I can’t rely on doctors anymore. I have to own it. I have to sit down, look myself in the face, and admit I’m not at my best. I need to admit that I need to stick to a regimen, but one that my body can live with. I don’t feel like getting back to 230 is the solution because I felt horrible being remotely close to there. I think for me my ideal weight is probably 240.

Which is only 20 pounds away. I can do this. Today I began getting back on the regimen I had dropped to the wayside when my personal life began to spiral. I’m not going to let that happen again, no matter what happens to me outside of this exercise. I’m going to stick with it, I’m going to keep a chart of portion sizes (already made), and I’m going to blog about my progress. If I hold myself accountable in these ways I know I can hit 240, that I can feel good about body image, and that I can be proud of myself.

Because 260 is a wake-up call, in every which way. That’s not ideal.