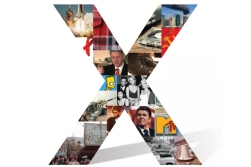 Remember when we were supposed to be the next big thing? Well, it seems like that time has passed. Our society is still focusing on those damn Boomers, and on our own children (the so-called Millennials), but what has happened to Generation X?

If you were born between 1965 and 1979 then you technically fit into this category along with me. You were probably conceived amidst pomp and circumstance, because our parents were part of the illustrious Boomer generation. There are just still SO MANY of them. Which stands to reason that we also have huge numbers on our side.

Who are our famous representatives?

While this is a short list, you can see that we don’t have too much to hang our heads about. We’ve got some all-time greats in this lineup, so why are we still so disrespected as a group? I liken it to the team that will win Super Bowl LI, because it’s not Super Bowl 50, or to an Olympic silver medalist, because gold is the standard, or even to the 1990s when the ’80s are so revered. We’re still dynamic, and we’re still worthy, but our achievements are too close to those of our predecessors.

Maybe that’s why Millennials are seen more in social media, why they’re touted as the real “NOW” instead of us. We’re has-beens before we ever were, playing second fiddle to the Boomers for so long, and now to our own progeny. And I guess that’s the way it’s supposed to be. I mean, does anyone remember what the generation before the Boomers was called? They were fittingly called the Silent Generation.

But we grew up in the ’80s. We matured under the watchful eye of Ronald Reagan and trickle-down economics. We pioneered MTV, and the rise of the Internet. We held up our end of the bargain when we were nicknamed Generation X, and yet we still don’t get the respect I strongly believe we deserve for our efforts.

Ah well. At least we have the X-Files.