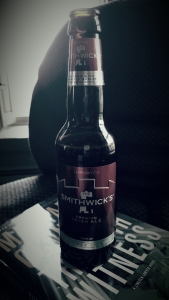 I’m drinking beer on a Sunday night at 7:20. I can’t remember the last time I did that. Maybe it was when I was 19 and I shouldn’t have been anywhere near alcohol. Or perhaps it was when I was 24 and drowning my sorrows over all the negative things that happened when I was 24. It might have even been last Sunday for all I know, because my memory’s just not what it used to be.

Nobody told me that the closer you get to 40 the worse your memory gets. I naturally assumed the age for memory degradation was 10 years away at the least. I was wrong.

And at least this is Irish Ale, so I can pretend I’m not hiding in this back room by myself drinking swill that I could have gotten for a couple of bucks at the corner store. For one, there are no corner stores here because there are no corners in the country. I bought this Irish Ale at Target, a place which up until about 6 years ago didn’t even carry alcoholic beverages. Oh how the winds shift.

So I’m drinking beer, and still trying to figure out whether or not I like the taste. I had a conversation the other day with a youngster who told me she hated dark beer, and I asked why. She said it was too thick, and I think I knew what she meant. When you take a sip of dark beer you need to be prepared, because it fills you up faster than the light stuff. It’s what I would call an “acquired taste.” And yes, I like dark beer, but I like the amber stuff too, and the light stuff too.

I just don’t drink very much of any of it too often. And that’s not because of the taste. That’s because I honestly have such a low tolerance that more than one bottle of beer (I don’t drink cans if I can help it) makes me just a bit tipsy. I used to think I was a silly drunk. I’m not. I’m just a bit more hyper than usual, which sounds like an innocuous thing but can get me into serious trouble. So I draw the line at two.