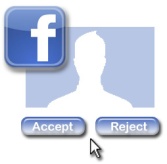 In this age of Facebook it’s all about numbers. Who has the most “friends?” How many friends are mutual between you and somebody else — and anybody else? How many likes do your friends have on their posts? And my favorite — how many friend requests are pending, how long have they been in stasis, and why?

I have no problem having “friends” I’ve never met in person before. I call them my acquaintances. I am acquainted with their names, and sometimes other things about them too, before I accept them into my world. I’ve noticed that often times these friends become even more dear to me than the ones I actually know in the flesh. I wonder why that is. But anyway…

There are four general types of friend requests I encounter:

At any given time I have several friend requests pending, and I try to check on them every now and then. Of course the longer they sit there, collecting dust, the more I’m sure the sender is deciding that I just won’t accept them. Maybe I would be better served just going with my gut on each one as they come in instead of letting them sit around. I can always unfriend someone later if I’m not pleased with the things they post.

Right now, at this very moment, I have three friend requests floating out there, all of which have been hanging out for a while, waiting for some kind of acceptance from me. I’m sure at some point I’ll get back to them.