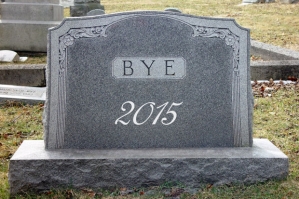 There was absolutely nothing wrong with 2015, at least from my perspective. The year opened with so much hope and promise, like so many years before it. I went back to therapy because it was necessary, not because I felt lost in an abyss. My children entered the year halfway through the lower grade and now end up halfway through the upper. We moved out of our house of 13 years and in with my mother-in-law. But even that is positive as it gives us a chance to save for the building of our new house in spring.

Always look on the bright side.

But 2015 isn’t over yet. In fact there are still a few hours remaining, and I plan on making the most of them, on making them count. Sure, 2016 will bring our move into our new house. It will carry on its wings my 40th birthday (shhhh). And it will usher in a new era as my oldest child turns a decade old in February. But 2015 isn’t over yet. These faint whispers of a year nearly gone by, almost buried in its grave, speak to me. It’s an old year, on its last legs, but it’s still here, and as such it needs to be remembered. We say that we shouldn’t let accolades for people linger until they become posthumous.

So raise your glass to the fading embers of 2015.. Here are my most robust memories of a year nearly gone:

That’s just a tip of the cap to a year that has given more than it’s taken, that’s allowed me to be myself more than I feel I’ve been in a very long time, that’s given me both silence and noise in equal measure. I’ve needed every single thing, every single obstacle, every single joy, that this year has given to me, and I will always look back on it fondly. Was it only 16 years ago that we were looking forward to a new millennium with such uncertainty?