I remember watching Cast Away, that loveably emotional film starring Tom Hanks, about a man who gets shipwrecked by himself on an island in the middle of nowhere. I would wonder if I could survive if I were in a similar situation, if it would be just too much for me to handle, or if I would always be able to see some kind of light at the end of the tunnel.

So I began thinking inward, trying to figure out how hard it would be. First, I’m a vegetarian, and I’ve always been one. How long would it be before I would even be able to stomach meat? Would I have to waste away to nothing before finally deciding I would go for it, only to get violently ill with that very first bite?

I’ve also got an aversion to things that are dead, so even if I would finally decide on eating meat, how would I get it? There is absolutely no way I would be able to set some kind of trap, knowing that in the end that trap would be the first step in killing an animal. And then, if I did fall apart enough to set the trap I would probably do everything I could to save the poor animal once it was trapped. Then if that failed would I be able to rip it apart and spear its meat with a stick in order to eat it?

I’m getting sick just thinking about it. And, don’t get me wrong, I don’t judge others who eat meat. It’s just not for me. 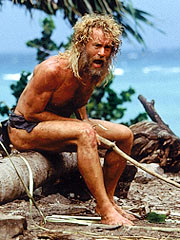 Then there’s the isolation thing. I thrive on interactions with others, so what would happen when only I would be around to talk to? I think I would essentially go crazy just yelling into the distance and hoping for an echo. I wouldn’t talk to a volleyball, that’s for sure, but ghosts sound like a good bet for conversation. There are many things I lack, but an imagination is not one of them. I would just worry that even if I somehow was saved my brain might have created too many false images that I wouldn’t recognize real human beings if they were right in front of me.

What would kill me the most, though, would be the defeatist thoughts that would be running rampant through my mind. And there would be nobody else there to tell me it was all in my brain, that it wasn’t real, that I would get through it and laugh about it after the fact. I could honestly picture myself lying down on the beach and not getting up, arms spread wide like a starfish, waiting for death to take me in its cold embrace. And still waiting.

Eventually, though, I’m sure I would get over all of that, at least to the extent that I can. I would probably eventually resort to killing wild animals with my bare hands, figuring out the best ways to roast their flesh, talking to pine cones, and counting down the days on some kind of makeshift calendar. Maybe it’s a survival instinct that kicks in when there’s nothing else kicking in, or perhaps it’s some basic bodily understanding that when all else is lost there MUST BE some other way. Whatever it is, I’m sure that I’ll somehow make it through.

But I’m also sure that I won’t be the same person coming out the other end, and then I’ll have to figure out how to live with that.