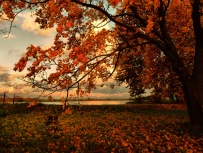 I am dreading October. No, seriously. It is a blight on my horizon that looms larger the closer I get to it. And I’m trying not to give it so much sway in my life, but I’m not doing a very good job of controlling those emotions. That’s because in a few short weeks, in the beginning of October, we will be moving in with my mother-in-law. She means well. I know that. But somehow the distance between meaning well and being controlling is too infinitesimal to truly matter.

When I first decided to move to upstate New York from Tennessee I had absolutely nowhere to go, no place to live, and no job on the horizon. I was taking the leap of faith, but I had to have someplace somewhat soft to land. So she stepped up, and at the time she wasn’t my mother-in-law. She was simply the mother of the woman I was in love with, the mother of the woman I had only met one time in the flesh before deciding to make the monumental leap. But she offered me a place to stay anyway.

I could have been a serial killer. I wasn’t, but I know she was worried. My own mother was worried about me getting to close to someone I had known for all of a few months, but the heart wants what the heart wants, and we had both made our decisions. So I packed up all my belongings in the world, and I drove north, to live with a woman I had met once before in my life, and who had every right to judge me from here to next Sunday. And for that I will forever be grateful.

But I realized in the month and a half that I lived in her house that life there was an exercise in control, either submitting to it from her or being the recipient of judgmental glances and whispered gossip. Which was okay back then. She didn’t know me from Adam, and she had every right to doubt me and my intentions. Back then it was enough that even with those doubts she let me into her home.

It’s 13 years later now, though, and my wife and I have given her 2 wonderful grandchildren whom she loves and they love in return. She is the definition of a doting grandmother, and I am grateful that she is there for them, but she hasn’t stopped the judgmental glances and the whispered gossip when it comes to me. It’s almost as if the intervening years never happened, or that they were all horrible (which they weren’t). And I give her the benefit of the doubt, but I don’t feel like she has ever done that with me. Unless I’m letting her be controlling.

So I’m dreading October, because I know we will be living with her for the foreseeable future, at least until our new house is finished sometime next summer, and while I hope that this time will be different I worry that being there so much will make me bitter. I don’t want to be bitter. I want to pretend it will only be for a week. I want to only see in her the doting grandmother, and not the judgmental soul she tends to be around me. I know I haven’t always been the son-in-law she would have preferred, but I try to be the best me I can be.

And I hope that by the October move maybe she’ll realize that.

2 thoughts on “The October Move”