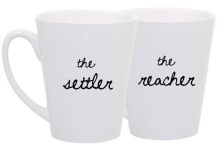 I am the reacher. I know it, and I’ve known it all along. Which is okay, because my wife doesn’t know she’s the settler. Shhh. Nobody tell her. It could get ugly. Don’t get me wrong. I’m proud of the way I turned out. It’s a long way between where I was before and where I am now, but at the time — yes — I was the reacher.

See, my wife has always known the path she wanted to travel, and she’s been methodical about getting there. She’s the most efficient person I know, and she has a brilliant brain. If I ever need advice about anything under the sun she’s the person I turn to because I know she’ll consider all angles of it before giving me a course of action. If there was a league she’d be in the majors.

And me, well, I’ve always been inconsistent. I’m a good writer with a solid head on my shoulders, but I’ve never been good when it comes to emotional… stuff. I’m more likely to make a mistake — to turn down the wrong path — when it comes to all things related to pain, and abandonment, and serious decisions, and love, and everything in between. I’m not patient when it counts, so I might as well not be patient at all. If I were in a league it would probably be triple-A (and for all you non-baseball aficionados, that’s the last step before the majors).

My wife has always seen my potential, though, and I think she ascribes that to me wholesale, as if I’m that idealized version of myself all the time, so when I don’t reach that level I worry that she’ll judge me accordingly. But that’s the thing — she never judges me for not living up to that standard. She sits there with me and talks me through what went wrong instead of pouting and saying I’m not hitting my mark.

With her I don’t feel like the reacher, and I don’t feel like she settled. She makes me feel like we’re on the same level, even when I fall off and have to get back up with her help. That’s because she always helps me. I reach out and she grasps my hand, both holding it and pulling me back up at the same time. In that way we’re both off-balance for a moment, in that space between reaching and settling, until we’re both settlers in the place we call home, together in all that emotional… stuff.

And I’m honored that she sees more in me than I see in myself. Maybe that’s what makes all good relationships solid in the first place, the settler’s firm belief that there is no reacher and no settler, even if the reacher knows better.