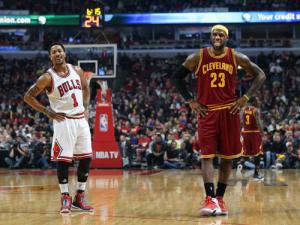 There is indignation in Chicago tonight, and they believe it’s justifiable to feel that way. But they’re wrong. Let me lay the scene for you…

The officials in the Bulls/Cavaliers playoff game had controlled the action, and the score, throughout the final five minutes of the fourth quarter, calling offensive fouls on the Cavs to let the Bulls back into the game, and not calling obvious fouls to try and win the game for the home team. With 3 seconds left on the game clock those same officials neglected to call a foul on Joakim Noah, instead letting the ball get knocked out of bounds by the Bulls. .8 was on the clock, but the actual time the ball went out of bounds was in dispute so they huddled at the screen to figure it out.

Meanwhile, the Cavs, who had no timeouts remaining, got an unofficial one while the referees conferred. By the time they returned they had not only put time back on the clock (to 1.5 seconds), but they had also given the Cavs a chance they wouldn’t have otherwise had to call up a play. Hence the ire of the Bulls fans at the United Center, thinking they were robbed when LeBron James took advantage of the situation and hit a buzzer-beater to tie up the series at 2 games apiece.

But they weren’t robbed. In fact, they shouldn’t have even had the chance to take this game to overtime if it weren’t for those very same officials. Earlier in the quarter LeBron James was called for an offensive foul, but the replay showed that Noah

was still shuffling his feet, a call that led to a Bulls field goal to pull closer. Then J.R. Smith was called for a technical foul when he barely touched a player who had hooked him around the neck. Finally, the no-call on Noah, who was on top of LeBron James as he went in for the contested layup right before the ball was hit out of bounds on that fateful penultimate play.

I was screaming at the TV, and I don’t even get into basketball that much, when Noah climbed all over James, and I found it priceless when the Cavs got the “free” timeout to draw up the final play. It was long overdue that they finally get a break in the final span of time before the end of the game. I’ll be the first person to admit that James did commit an offensive foul when boxed in by two Bulls players, the play that led to the game being tied in the first place, so it was vindication when he received that inbounds pass and hit the shot that was the final dagger in a game that really would have been over long before that if not for those same referees.

Payback is a bitch, isn’t it? Sorry, Chicago fans. But those are the breaks.