If I were in a 12-step program it would probably require me to do a bunch of things I don’t want to do. You know, like apologize to people I’ve wronged in order to restore harmony to the universe, or something like that. There’s something to that 12-step program mantra that presupposes things that are out of harmony can be realigned by words and focus, as if karma can be thwarted because we’re sorry.

Hold up. Let me start again. I believe in karma. Yes, that’s a better beginning. I think that we do indeed reap what we sow, sometimes in more ways than one. And I think it goes both ways, positively and negatively. It’s like reinforcement. When we see a child yell at another child and we slap him on the hand for yelling, we shouldn’t be surprised when the child, in another conflict, slaps another child on the hand instead of yelling. We are just like children in that way because we do learn from others around us, and these interactions shape the way we see the world.

Karma: action, seen as bringing upon oneself inevitable results, good or bad, either in this life or in a reincarnation.

When I was twenty years old I stole money from my mother. It was a lot of money, but the amount doesn’t really matter. The action itself does. My mother had spent nearly her entire adult life providing for me and my sister, doing everything in her power to help us succeed in life, and my actions were a slap in the face. When she found out it was the disappointment in her eyes that hurt more than yelling or hitting me ever could have. I broke my mother’s heart, not just because I stole the money but I spent time and resources lying about it. That action created subsequent ripples that changed the entire course of my life. That’s karma.

And I have been sorry from the moment that happened. Things were strained between my mother and myself for years, but we’ve finally gotten to a place where the awkwardness if gone. That’s not to say I don’t still think of it from time to time, and that she doesn’t as well, but she’s forgiven me and we’ve forged a new relationship from the ashes of the old one. Yet there are still consequences, inevitable results of that transgression, the primary one being that it was the impetus that sent me to Tennessee, a horrendous place, but a place I needed to be in order to meet my future wife. Funny how that works, that both good and bad consequences came out of that poor decision.

“What you give is what you get returned.”

That quote still haunts me though, because it’s inherently untrue, and even though I believe in karma, I don’t think reciprocity is the only outcome, meaning irony can be a huge part of karma. If you give fake compliments and you make fun of someone behind their back, sometimes the best karma can be them treating you nicely, doing something special for you that makes you feel horrible that you were so cruel. And there are some people who are mean and prejudiced for whatever reason, so no matter how nice you are to them they won’t be nice to you in return. They will get theirs. Just wait and see. And even when you can’t see it, it still happens. Some karma is quieter than others. 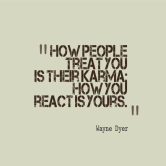 What I love most about karma is that it follows science, that for every action there is an equal and opposite reaction, even if we don’t understand how it fits the “opposite” end of the spectrum sometimes. Is it some God who deals out the consequences or just the result of a universe so full of emotions and energy that it’s bursting at the seams and overflowing? I like to think it’s a little of both, that the scales balance even when we don’t see it, that this life is a complicated interweaving of actions and reactions, of reinforcements and consequences. But whatever it is, I know that it’s never a one-way interaction between us and this crazy universe of ours.

And that makes me proud just to be a part of it.