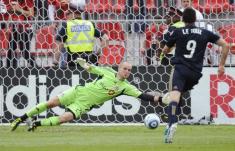 I watch a soccer match maybe once every four years (Olympics, people, Olympics), and I’m always struck by how insanely boring it can be when the teams aren’t scoring. Seeing as they don’t generally score that often most times I sit there thinking about other things while they kick the black and white ball around in the background. I would probably be doing the same thing if I was physically at the match too, which is why I’m very glad I’ve never been invited to be at one.

But when they do score it’s dramatic, no more so than when the announcer gets amped up, raises his voice, and draws out the word like it’s a knife and he’s liberating it from its scabbard. “GOOOOOOOOOOAL!” he says, and I look up from my ruminations to find guys dancing around shirtless. Uh, when did that happen, and why did I miss the most dramatic thing that’s probably going to happen this whole match? Luckily for me usually after that pronouncement (that scream, really) they replay the actual goal and I can pretend I saw it from the start. “Yeah, I was there when Ronaldo scored.”

I think maybe I do that in life too sometimes. Each day follows the one that came before, and they begin to blur together, so I mentally check out and go through the motions. Before I know it a week, a month, an entire year has passed by and I don’t know where it went. In the process I missed out on the major moments that could have helped me reach my own goals, and there’s no announcer with a booming voice to alert me to what I missed so I could get a do-over. So I guess I should just try and stay alert all the time, to imagine life is a football game and if I miss the snap I’m going to fumble the ball.

And setting my goals is important in making all of that a reality, in not losing my focus like I’ve done so many times before. So I’ve done that, and I have three solid writing goals for this year. I’m going to use them to keep myself inspired and headed in the right direction, and maybe after I accomplish each one I’ll ramp up my soccer announcer voice so I can find a way to stretch out that infamous word. I’m just not taking my shirt off. Sorry ladies.