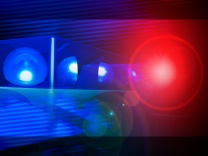 The lights are obvious, their staccato rhythm mesmerizing against the gloomy backdrop of the highway at night. But they are alone, with no siren to punctuate the otherwise still air, as the old car eases to the side of the road. Steam rises from the car’s exhaust pipe, disappearing into the dark sky as it climbs. Sliding into place a moment later, a police cruiser blocks out the view of the old car as it sits idling on the shoulder, like an old lover tossed aside.

A man emerges into the shadow cast by the blinking lights. He gazes for a brief while at the passing traffic, at all the cars that ease across the lane line in the opposite direction, their drivers splitting their focus between the lights and their own destinations. It’s easy for him to forget the past when the present is so immediate, so sensitive. His cruiser purrs at his back, bringing him back to the moment, and the reason why he stopped in the first place. He approaches the old car, his long stride getting him to the driver’s door in four steps.

The man in the old car sits ramrod straight, but his back is crooked so it hurts him to no end to assume such a position. He just knows it’s expected of solid citizens, something he is not, but something he wants to portray to the officer who is approaching his vehicle. He checks out his eyes in the rearview mirror, and they sparkle with a pent-up mischief that might just be his undoing on this starless night, on a road he’s never been on before, in a county that detests his kind.

He has long, greasy hair that hangs limp past his shoulders, in the fashion he has always preferred, even after the lice were found to have infested that same hair some months back. In fact, he still itches from time to time, what he perceives as a ghost itch but what is in fact still lice doing spring cleaning in the nest on top of his head. There are beer bottles scattered across the back seat of his car, something he can do nothing about. At least it’s not light beer, he thinks, strangely proud of his manly attitude in the face of difficult questions to come.

This is not his first scrape with the law, and he knows any scanning of his driver’s license will expose this as surely as a searchlight would expose a man hiding in an empty reservoir. But he is confident nonetheless, because he has been listening to a self-help tape that says if he projects confidence people will believe he is confident. He has unwavering belief, and so he knows the police officer will let him go with a warning this time.

The officer arrives at the old car and knocks once with two knuckles on the driver’s side window, and the grime that coats that window attaches itself to the back of his hand. He grimaces before straightening his mouth into a brutal slash that shows he means business and surreptitiously wiping his hand on the back of his pants while the window is being rolled down. The first thing he sees in the light of the dash is the long, greasy hair that creeps him out almost as much as the grime on the window did. His flashlight also finds the beer bottles on the back seat, and he checks the driver’s eyes for tell-tale signs.

The two men study each other and notice the apparent contrasts at the exact same time, wondering where the shift occurred, when the road diverged and took them in vastly different directions. The old car stutters once, as if it too senses the shift, rattling and coughing in the still night air. Lights of other cars continue to fly past like fireflies let out of their jars at long last. These lights are mirrored in both men’s eyes, the one hard and sober, the other loose and wasted. It’s not hard to see as the driver’s license and registration change hands, one shaky and the other steady as steel.

The firefly lights continue to zoom by in the driver’s periphery as the officer returns to his vehicle, to the flashing lights that are still going a mile a minute, and to a reality that judges the other man harshly. He scans the license while the other man continues to stare ahead, his eyes following each light as it passes. The driver nods at each one in turn before letting out a sigh and waiting for his world to change.