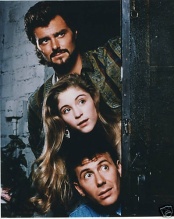 There was a show in the 1980s, called My Two Dads, about a 12-year-old girl who somehow came to live with two guys she happened to call “Dad.” These two fellows couldn’t have been more different from each other, with the one a sensitive artist and the other a staunch businessman. But neither knew who her “real” father was, and it didn’t even matter, because both were there for her when she needed it, both loved her more than life itself, and they both put away their differences to raise her together. It was a beautiful show.

I remember watching the show and being amazed that this girl was being raised without a mother, and how well adjusted she seemed for the most part (she was a pre-teen and teenaged girl, after all). I could never have imagined living life without a mother, because I never had to, but it made me think about all the people out there who don’t have that nurturing spirit to help guide them. The show didn’t make me sad, though, because it showed that not all families need to be defined as mother, father, and kids to be a successful and nurturing family.

My mother raised me and my sister from the start by herself. Yes, my dad was there at the beginning, and I do have some positive memories with him, but he was gone a lot. An awful lot. Most of my concrete memories, both positive and negative, originate with my mother because she was there. Living a sheltered life meant that I spent a lot more time with my mother probably than a lot of other young kids who were my age. Of course I wanted to explore, to get out more, but I realize now that having that solid force in my life helped to sustain and focus me even then.

When I think of mothers, my mind can’t help but go back to the early ’80s when I fell down my Nana’s steps and scraped my knee up pretty badly. I was drowning in tears and my mother told me it served me right, that I shouldn’t have been fooling around. Then she put on antibiotic and patched me up nicely and neatly and gave me a big hug. See, that was what my mom always provided, what you might call “tough love” today. She knew that just coddling me wouldn’t make me a responsible man, someone who could deal with all life had to throw my way.

My mother also supported everything I was interested in. She knew I was a voracious reader, so she would take me to the library as often as she could, and I would get dozens of books out at a time and devour them. She knew I loved to sing so she would take me to all kinds of church concerts, and later on I helped out by being the 9th caller so many times I lost count on the local Christian radio station. She still has one of the mugs I won from that station. She also knew how much writing meant to me, and she always fostered that love, helping me hone my writing skills.

I’ll admit now that I often took my mother for granted. She was always there and I had no doubt she always would be, but I think back on it, and so many moms weren’t there for their children. They would sit them in front of the television while they did god knew what with god knew who, or they would just let their kids play in the street oblivious to what might happen to them out there in the ghetto. I was blessed, and I didn’t truly appreciate it then. I do now.

The other mother who comes to mind when I think of mothers is a woman who wasn’t a mother when I met her. In fact, being with me, there was no guarantee she ever would be, but she had that spark. You know the one, that spark that says she will fight for what she wants, and she wanted to have children with me. So she went through some horrendous experiences, some devastating disappointments, and some frustrating times, but in the end she got what she wanted, and so did I. Eight years ago, at long last, she became a mother, and I honestly wouldn’t want anyone else to be the mother of our children. 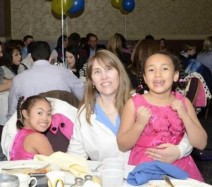 She’ll tell you she’s not patient enough, that she’s not prepared enough, that she doesn’t measure up, but that’s only because she’s always been hardest on herself. She holds herself to an improbably standard, but that’s fine because that makes her an even better mother. She is patient when she needs to be, she does wonderful research, and you could have no better advocate for our children than she is and always has been. I love her perseverance, her attention to detail, and the light in her eyes every single time she sees our daughters. She was born to be a mother, and it shows.

Then, when our second daughter was born with Down syndrome, we were both caught unaware and had no clue until after her birth. But when others were falling apart, my wife was already making calls, doing her research, and preparing herself for a different type of life than the one we had anticipated. She had already switched gears and was making sure even then that our child would have every possible assistance, from the moment we brought her home. That’s just the kind of women, the kind of mother, she is, the kind she always has been, and the kind she always will be.

The two women I call “Mom” are radically different, but they both have given me so much more than I could have ever asked for from them. They take the calling seriously, and yes, being a mother is a calling. They have gone above and beyond every expectation, and they’ve done it without even thinking about it. They are both so incredibly humble for doing so much, and I love them beyond words.

The key, though, is to remember and praise all that they do every day, not just on one day. And I vow to make sure they know how I feel always.