When I was a kid, summers were for having fun outside. They were all about riding our bikes, swimming (if we had the chance), playing in the hydrant (more often than swimming), YMCA camps, and staying away from bologna as much as possible. It was the time of year when, even though we had responsibilities, they weren’t as immediate or as detrimental to our precious time as at other times of the year.

That’s because summers were truly endless. It was like someone flipped the switch, the room became bright, and the bulb didn’t burn out until three months down the line. It didn’t matter that we still had church every week because nothing else was really set in stone. Because summers were for us kids. My mom still went to work every day, and she left us a chores list, but we would blast those out of the water and move on to the more fun stuff.

It’s funny. Even though we lived in the poorer part of town (sorry, North Philly) and there was a lot of… activity around, it was like we were in our own protective bubble, being kids. Looking back on it, I know that couldn’t have been entirely true, but it felt that way. On long summer days you could look up and down the block, and the next block over, and the one past that, and there were a lot of kids out on our own, doing whatever our little hearts desired.

I don’t remember all the bug bites (well, I do remember one particularly heinous one), or the rainy days, or the drug deals that took place not too many paces from where we would play hopscotch in the street. I know they happened, but they were anathema to the fun we were having, so the old hard drive edited them out. For nostalgia’s sake, they never interrupted the sanctum of the endless summer.

Summers were especially treasured by me and my sister because they were so different from other parts of the year. Because my mother was ultra-protective, it was rare that we really got to go out and have fun during the school year. If we did get out it was to go to church for whatever nighttime service they could think up. So summers were for letting our inner wild children loose. In moderation, of course. We still had to make it home in one piece by the time my mom got off from work.

Sometimes we would load up the Nova station wagon and take summer road trips, never really too far (except for that trip to Disney), but far enough to help us forget reality. Those were fun, but they always left me wondering why we couldn’t do that all the time. I really had no concept of money back then, but I somehow knew we didn’t have much of it. That much was obvious, so the regular summertime fun was always pretty much of our own design, not because we could buy anything.

Even though we didn’t have much money, we did have our little treats. Summers were also for water ice. I remember how excited we would get when my mom would come home from work, exhausted, but with a smile on her face, because we were going to Jack’s for some water ice. She would even let us pick our own flavors. It was rare we would get anything larger than a small, but that little drop of heaven was more than enough for us. 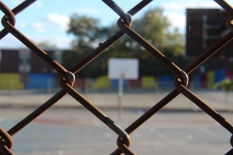 That’s what I loved most about those endless summers, really, getting to spend quality time with my sis when she was acknowledging my presence, when she really wanted to do things with me, when she treated me like an equal. That’s really what I wanted the most back then, because we were in the same boat. We were refugees together from the storm that was our parents’ relationship, and then the split, and she made me feel like I wasn’t alone in the turmoil.

Those endless summers I will never forget. The feel of the sun on my face when I threw the door wide open ready to have another adventure every single day. Until forever.