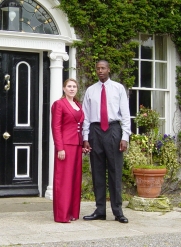 Has it really been 15 years already? I don’t believe it. Well, the mirror believes it for me though. When I look back at pictures from our honeymoon I see this youngster, svelte (some would have said painfully skinny), ready to take on the world. It’s been 15 years, and a lot of change later, and I still feel like that youngster ready to take on the world. Well, I feel like that inside. The aches and pains of my body on a daily basis beg to differ with me that the feeling is overall.

And 15 years ago… we knit our lives together, not as one, but as two individuals who knew the bond was strong enough to last. Thank god we were right. At least here we are, standing shoulder to hip (that’s not a short joke, I promise) all these years later. I think of all the trials and tribulations we’ve had over the course of these 15 years, but I also think of how we overcame each and every one. Not that they were easy — far from it — but that we were able to assault them and put them in our rear view mirrors after a fashion. That’s startling to me.

But time hasn’t mellowed us. It’s sharpened and blurred our edges at the same time…

My previous record for longest relationship before I met Heidi was three and a half years. I think we got that beat. I know before I met her I couldn’t even imagine what 15 years would look like. Heck, I couldn’t imagine what five would look like, to be honest. But to be equally as honest, sometimes these 15 years don’t feel like they’ve taken all that long to pass. The only times I really fathom how long it’s been is when I look at our children — 12 and 9 respectively — and I am humbled.

Time has no challengers.

But time hasn’t mellowed us. It’s sharpened and blurred our edges at the same time, making us more ourselves, helping us retain our individual selves while becoming more of a cohesive couple. Because that’s where it all began after all. First it was us, individually. Then it was us together. Then it was us, together, being parents. And 15 years passed, but it still is what it was. We are still individuals struggling together through this thing called life. We are still a couple that works hard on making sure we keep the connection strong. 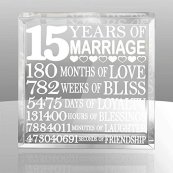 So when it was time to figure out what I wanted to get my wife of 15 years it should have been easy, right? Well, not quite. You see, 15 years means 15 anniversaries, and 15 birthdays, and numerous Mother’s Days — you see where I’m going. I’ve been really original some years, and really cliche during others, but I’ve always had some ideas. This year, though, as our anniversary approached, I had one big gift and no more thoughts in my head. Everything else I could think of I’ve already done for her, and I’ve never been one to recycle.

What do I do when I am out of ideas? Luckily for me, wedding anniversaries come with a guide. Each year has a special connection. Like year 1 was paper. That was pretty cheap, I must say. But year 15, when I looked it up, proved to be crystal. Yikes. And it doesn’t go back from here. But when I thought about it, really thought about it, crystal makes absolute sense when it comes to Heidi. She is as tough as they come, but she often also wears her heart on her sleeve. Crystal is tougher than it seems, but it’s see through, which makes it look fragile.

My wife is the single strongest person I know, and after all this time I’m still working hard to show her just how much I appreciate her every single day, not just on our anniversary. Yet, here it is, the special day, and I’m ready for it. Because 15 is crystal, and I will not disappoint. Now, if I could just get up from this chair.