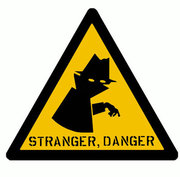 My mom told me everything I needed to know about strangers when I was little.

“Don’t get into their cars, no matter who they say they are, or what they promise you,” she said to me, hands on my shoulders, looking me straight in the eyes. “That’s how they get you, and you don’t want to get got, do you?” she asked, but I knew it wasn’t a question. It never was a question. I nodded my head. I didn’t want to get got.

So… if strangers are so bad, how come it’s the people we know who do the most damage to us? You’ve probably heard the horrendous statistics that get trotted out every once in a while to prove that people we know are more dangerous. You’ve undoubtedly read the startling anecdotes of those who were horribly mistreated by those who claimed to love them. It happens all the time.

And yet we still teach our children that strangers are the bad ones. It’s easy to say, of course. It was easy for my mom to say, and it’s easy for me to say too. Because if we don’t know someone they might have it out for us. They might also be boy scouts who really just want us to have our choice of free ice cream from the back of their windowless vans. Everyone knows windowless vans are cheaper than ones with windows.

The problem is that anyone might have it out for us. You know how life goes. We end up places we never dreamed, with people we never knew before. Remember that all those friends you made were once strangers. If you hadn’t ever talked to them you wouldn’t have these amazingly three-dimensional souls you would give your lives for in a heartbeat. Well, that you would give your lives for if it was absolutely necessary anyway, if you couldn’t offer something else as an alternative.

Strangers aren’t the problem, although my mom, and your mom, and your Aunt Sally couldn’t have possibly known that back in the day. We are taught to fear the unknown, but isn’t it also “better the devil that you know,” and all that? There’s this carefully constructed dichotomy that keeps us in constant fear of those we haven’t known for XYZ years, but that also makes us wary when people we know do things that are out of character for them. It keeps us on edge, at least these days, because the world is full of crazy. That’s what the kids say these days. The world is full of crazy.

When you’re a kid, strangers are perceived as people with giant lollypops who hang out at the street corner across from your school, not Uncle Ted, even though you’ve never met Uncle Ted before. These days strangers can be people who Facebook message you because you’re “friends of friends.” Don’t ever assume that just because someone is Facebook friends with someone you know that you can trust them. Not everyone has a stringent screening process, and/or cares enough to keep those who they don’t know standing at the gate.

It’s a new world these days where “full of crazy” could be so subtle you could miss it if you happen to blink one day. It’s a time when everyone is suspect because no one is suspect, when life can throw you curveballs and you’d be hard pressed to distinguish them ahead of time from the fastballs that always rain down on you. I know I’ve been hit more than once by a few of both persuasions masquerading as just another experience, but they turn sour quickly. Or maybe they were sour all along and I just didn’t realize it because I was too busy giving others the benefit of the doubt.

Maybe I should have listened to my mother a bit closer all those years ago. Because, now, as an adult, I realize there are way too many strangers in my life. There are way too many people who I don’t know, but who I assume I do. There are far too few who I can honestly say I know beyond the shadow of a doubt I would give my life for. You know, if there was no alternative available. Stranger danger? Well, that’s tricky, but so is trusting people in the first place.

Just… well… you still shouldn’t get into windowless vans.