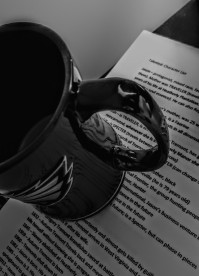 I’m sitting here at my desk with a cup of coffee to hand, thinking up fantastic stories that will hopefully come to fruition in the next 30 days. It’s dark outside and I feel like utter crap, but my brain won’t shut down for the night. That’s because November is National Novel Writing Month (NaNoWriMo), and I am once again taking on the daunting task of writing 50,000 words in a month. This is my sixth year doing NaNo, but there was a time when I never thought I’d ever even attempt it.

For a long time I was simply a writer of short works: short stories and poems were my forte, and I didn’t stray too far from those. They were creature comforts for me, as reliable as Old Yeller and much cuddlier. People would sometimes ask me if I was ever going to try and write a novel, and I would laugh at them. “Why would I stretch outside my comfort zone?” For me it was an easy answer, because for me it was all about doing what was easy back then.

My wife, upon hearing that I was gearing up for yet another NaNoWriMo, good-heartedly joked, “So we won’t see you for the next month.” On some level that’s about the extent of it, honestly, because NaNo takes a singular commitment. It means setting word limits every single day and hitting those word limits, come sleet, snow, or hail… you know, or even the dreaded writer’s block. It’s particularly tricky when faced with all that life likes to throw in the way, but that’s also what makes it so satisfying. When I look up on November 30 and realize I’ve surpassed 50,000 words in one month I raise my hands high like a fighter who has gone 12 rounds with a behemoth.

So I’m ready to begin again, but this time will be different from the ones that have preceded it. For one, I won’t be writing something directly from scratch. With every other NaNo I came into it with some ideas but nothing really set in stone. This time, though, I’m writing a sequel, which is a first for me. I’ve never written any kind of series, for probably the same reason I hadn’t written a full novel until seven years ago. Once I had the idea of writing a novel under my belt it became relatively easy to write with that in mind. But a series… well, it takes that much more commitment and an ability to take your characters and seamlessly slide them into another world, even if it’s the same world.

I guess it would have made more sense to just write 200,000 words in one shot, then separate all those words into two or three separate books, but I can’t imagine writing that way. For me every book has to have a beginning and an end, and splitting something in the middle seems just a tad bit wrong. Besides, now that I’m up for challenging myself, why not add on some more pressure? Maybe I should have waited until my 10th NaNo to attempt it, but I’m feeling like it’s time now.

Which reminds me, I’m tackling this as a YA series, something else I’ve never really done before (the first book hasn’t been released yet). It’s fascinating to me to write something so foreign to me, and yet I absolutely adored the first volume in the series. I knew while I was writing it that I wasn’t done with the characters, but I never thought far ahead enough to know exactly where I would take them next. Or where they would take me next.

I have a title, and that’s a start. I also have a chronology that I’m thinking will go in the beginning of every book in the series. It’s a start indeed. And first thing tomorrow I’m going to begin the beginning, as I attempt to string thread from where the first book ended off to where this one enters in. My thoughts have gone many places, from when I first decided to attempt to do this, to right now on the verge of actually digging in. Either I will get through it or I won’t.

But I think I will. Now I just need to begin.