“We’re heading home,” I told my youngest daughter, and she gave me the broadest smile. It’s the one that shows all her teeth, and my favorite as well. There’s just something about her showing enjoyment that warms my heart. 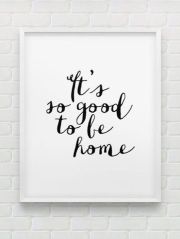 We were boarders for 18 months, caught in the circadian rhythms of another household, of another system. It was the longest I’ve ever held my breath, waiting for it all to end, to finally be in our new house. And here we are, ready to take on another fall and another winter, our first of both seasonal varieties ensconced in our dream made real.

Madeline likes to call it “the new house,” and I correct her by saying it’s “home,” but perhaps we are both right. I think she likes knowing it as “the new house” because it helps her distinguish it from the other places we’ve lived. It reminds me once again how her brain works, of the organizational structure with which she lives her life. For her everything is cut and dry, black and white, stark in its edges with nothing on the margins. This is the new house now because it wasn’t here before, and now it is. And now we live here.

But she doesn’t change her designations either. It is the new house now, and that much is true, but in four or five years’ time it won’t be so new anymore, but to her it will still be the new house. To her it will still be the new one because it can never be the old one, and I love the way her brain sees it. It’s as simple as can be, this reliance on a phraseology that distinguishes for the moment but also for forever. I wonder what she would call this place if we ever moved again.

I told a friend today, when she asked how the new house was treating us, that waiting to be in was endless, but now that we are in I can’t really remember not living here. It’s the same way with my children. That’s probably the only thing I can really compare it to, life before my kids getting hazier by the second. I think it’s because this house, just like my children, is a permanent part of my life now, because now all of my memories from here on in will include this house in some way, shape, or form.