I am a 90’s song. Not quite electronic enough to be 80s. Not quite teeny bop enough to be early 00’s. I’m like Britney Spears’ “Sometimes.” I wanna believe in everything that you say, ’cause it sounds so good. But if you really want me, move slow. There’s things about me you just have to know. It takes time, though, to open up, because like most people I’ve been hurt before. I’ve trusted the wrong people who have let me down. And I’ve let down others, but I’m trying.

Sometimes I am guarded, and I retreat into my shell, while others I am gregarious and over the top. Sometimes I play to the stereotypes of what others expect of me, as some kind of a joke on them (Shhh, they’ll never know I was playing a part). Sometimes I go the exact opposite direction of what others might expect of me. But always I am a 90’s song, ready to explode into a soaring chorus… when the mood arises.

Sometimes I am like that Mm Mm Mm Mm song, where I simply hum along with the beat, whoever is setting it at that moment. While other times I am “Popular.” I’m head of the class. I’m popular. I’m a quarterback. I’m popular. My mom says I’m a catch. I’m popular. And if I say it enough to myself, in my mind, I start to believe it. I start to think that everybody should love me, even though I know that’s setting myself up for a fall. Obviously not everyone can like or appreciate everyone else. But I wish it could be the case.

I am Tevin Campbell in that “Can We Talk” video, chilling under that bridge because he knows the girl is going to give him the time of day if he just looks cool. I take selfies because I’m trying to affect that cool look. And not even for others, but for me. At least sometimes just for me. I don’t share the vast majority of those selfies. I am that Spice Girls song, “Say You’ll Be There.” There is no need to say you love me. It would be better left unsaid. I’m giving you everything, all that joy can bring. This I swear. And all that I want from you is a promise you will be there. I fear being alone. Does that make me codependent?

Sometimes I am that Gin Blossoms song, “Follow You Down,” even though most times I’m a leader. But when the ball gets rolling I can tend to get caught up in the momentum without thinking ahead. I know we’re headed somewhere, I can see how far we’ve come. But still I can’t remember anything. Let’s not do the wrong thing and I’ll swear it might be fun. I have to always remember that, to keep it in the back of my brain so I don’t go off the rails. It might be fun.

But I try not to worry about the friends thing, even though I’m like a dog chasing his tail when it comes to that. I try to stay slightly aloof about it all, not to dive headfirst like I’ve done before just to drown. But if I can’t swim after 40 days, and my mind is crushed by the crashing waves, lift me up so high that I cannot fall. Lift me up. Lift me up when I’m falling. So I try to keep my head above water, even when it seems that the world all around me is a flood. 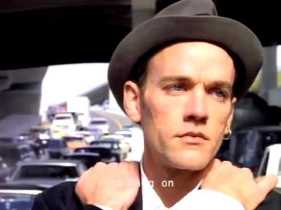 I am a 90’s song because I can’t help being one, because I’m a tortured soul living a life that gives me everything I want. I’m like that R.E.M. song, “Everybody Hurts.” Well, hang on. Don’t let yourself go. ‘Cause everybody cries. Everybody hurts sometimes. It’s okay to feel things. It’s alright to be disappointed with how things are. But it’s not okay to dwell on it to the exclusion of appreciating what’s wonderful in my life. I look around me, and I am so grateful despite the letdowns. Maybe even partially because of them. Because how else would I grow?