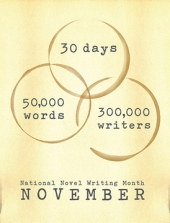 So I went for it. I started on November 1, 2012, with nothing in my mind but the ghost of an idea, a head full of imagination, and some half-formed characters begging to be set free on the page. It was the first time I would work with a deadline in mind, at least when it came to my own creative writing, and I didn’t know what to expect. But I quickly realized it would be a battle of word count goals.

30 days. It seems like such a huge amount of time until you get into it, and then it goes by like quicksilver, fast, then faster, then fastest. And getting behind in my word count goals was not an option, even if my word choice and narrative suffered for it, which I’ll admit happened sometimes that first November. There were some days when I was over 2,000 words in and nothing was on plot.

But I kept writing, which was the goal. I didn’t care about being perfect; that had to be thrown out the window pretty quickly when it hit me how much writing I would honestly have to do. And life got in the way too, the way it often does when I’m trying to get places. Some days it was work, and the rigors of an eight hour day working retail. The last thing I wanted to do when I got home was put my creative brain in motion, but I did it anyway. Then there was spending time with my children, which I love, but it also took time and energy from the writing process.

But I maneuvered around those things, and I kept writing. Some nights that first November I was up until nearly midnight (I always observed the rules of word counts for each day ending at 11:59), but I always got my count in. In fact, some days I was able to bank bonus words to help me when I knew I would have a hard time the next time generating text. I’m not saying it was easy, because it wasn’t, but when all was said and done I had gotten to 50,000 words before the end of the month.

It is a labor of love, the setup and execution that it takes to get to that word count, not just at the end of the month, but every single day during it as well. And as I finished another 50,000 words this November I felt like reflecting on the month that started it all. I’m so glad that I persevered, that I finally took the challenge I had put off for so long. I know I’m so much better for it.

6 thoughts on “The First November”