I woke up this morning, determined not to fall victim to any of the lies I knew would be posted to Facebook today. No, I don’t believe anyone got pregnant overnight. No, I don’t think Kobe Bryant is the next Dr. Who. No, I cannot even fathom why anyone would post that they had the shingles and think it would be funny. But I did see this funny meme featuring Mr. T. 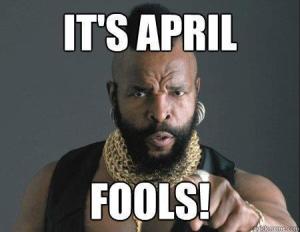 And when I finally stopped laughing, I realized just why all of those other posts about April Fool’s were so awful. It’s because there are pranks and hoaxes all the time that come through my Facebook news feed, from “celebrities you’ll never believe aren’t dead,” to “real photos from inside the casket,” to those people who friend request me who have 1 other friend and no profile picture. Uh, yeah. You’re legit.

We live in a world where everyone can be heard, but not everyone needs to be heard. Anyone can post anything anytime, and that makes for a lot of clutter. It used to be that we needed to sort through the clutter on this day, not on any others. We could trust people the other days of the year to tell us the truth, because our circle of friends was small. Now we live in a world where our “circle” of “friends” is routinely over 1000 strong, and therefore the “friends of friends” who show up on our news feeds are monumental.

No wonder quite a few of these pranks and hoaxes show up so often in our news feeds. When Robin Williams died I thought at first that it was another one of those pranks. It took me a few hours, and enough people saying it was true, for me to ultimately send my virtual condolences into the abyss, for me to finally contemplate life without Robin Williams. It’s just such a sad world when something like that is doubted because there have been too many hoaxes.

People must have nothing better to do. I scroll faster these days, and particularly today, but there weren’t any more than usual really. The only difference was that some people who I know never post these things got in on the action today. I saw no fake pregnancy posts, so maybe people are taking it to heart, at long last. That’s just not a joking matter. Take it from someone who had to go through extraordinary methods to have children.

Anyway, so that’s another April 1st down. If only every day didn’t suddenly feel like April 1st. Fools.

One thought on “It’s April, Fool”