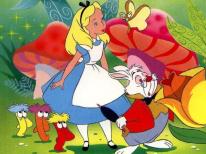 “We found Wonderland. You and I got lost in it. And we pretended it could last forever.” ~Taylor Swift

I love fantasy, the idea that elves, and wizards, and dwarfs, and witches, and magical lands actually exist somewhere beyond the rainbow. In fact, when I read fantasy I can almost believe that it’s real, that I will turn the corner sometime and find myself face to face with a warlock chanting incantations over a boiling cauldron. On occasion, when no one else is around, I wave my hand dramatically and say “Piertotum locomotor!” and I imagine the inanimate objects are rising up to do my bidding.

I went with Alice through the looking glass into Wonderland when I was 8, one of the most thoroughly exhilarating and wildly ridiculous journeys I have ever taken. And I can’t say I understood every single thing that happened there, but I can say I’m glad I went, that I got to experience that magnificent tea party and that fascinating cheshire cat grin. I’m not even going to talk about the hookah except to say that it stumped me more than pretty much anything else. But it all incited my curiosity and made me long for something out of the ordinary.

Then there was Narnia, and I wished I was a Pevensie. I wanted to be the long lost fifth sibling through that wardrobe and into the all-abiding winter that it entailed. And I was. I went on every single adventure with them, fighting with Reepicheep on the deck of the Dawn Treader, watching Caspian be crowned king, even to the very edge of the world, and I mourned Narnia as deeply as I’ve mourned anything in this life. I wanted to go back, to live more adventures in that great country, but it was not to be.

And oh yes, there was Fantasia, the strange land of the characters in The Neverending Story, a movie I watched when I was 10 and have loved ever since. I imagined I was riding on Falcor, that I was Atreyu battling to defeat the Nothing. I was so afraid that Fantasia would be destroyed but I had hope in Atreyu, in the childlike empress, and even in Bastion. I wanted so desperately to save the land of fairy tales, to rescue that childlike imagination that should always survive regardless of whatever is going on in the world.

That’s what really draws me in time and again to the fantastic, the idea that imagination can take us over and inspire a loyalty that is lacking in the ordinary. It’s why Harry Potter is really the chosen one, why Gollum is addicted to the “precious,” and why Neo is master of the Matrix. I love fantasy because even the most seemingly insignificant can be the hero, and the strongest can be weak. It’s a wonderland that continues to fascinate me to no end every single time, no matter the magical place or the people within it.

And, like Lucy, I’m still pretending it can last forever.