“Do you prefer taking risks or having a safety net?” 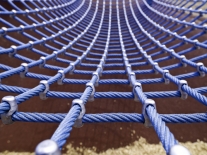 When I was a kid we used to go to Sesame Place in the summers. It was conveniently located not too far away from home, it was geared towards the younger set, and we loved the TV show so we were in awe of the characters we ran into on the fake streets. I was a particular fan of Big Bird because I just couldn’t see how any bird could be that HUGE. This was of course before I realized that there really was no bird that was as huge as Big Bird, you know, because Big Bird was fake.

Anyway, the coolest thing about Sesame Place (besides meeting the characters) was getting to climb Big Bird’s Nest, a cool series of nets made of thick ropes tied and twisted together. I loved it because we could climb as high as we wanted and then if we let go we would just drop onto the lower part of the netting and be safe from crashing to the ground. Nothing beat the adrenaline of falling through the air with my eyes closed, knowing I would be cushioned at the end. That’s the same reason I would never sky dive. A parachute isn’t nearly as reliable as Big Bird’s Nest.

But how does that translate to real life? I wouldn’t say I’m a big risk-taker generally. I prefer to let things come to me instead of going out and getting them. When it comes to huge things, though, that’s when I will take those risks, for the chance of big change instead of all those little shifts. And sometimes that propensity to take the bigger risks works out, while sometimes I fall flat, but at least I can honestly say I left nothing out there. I can say that I closed my eyes and fell with no idea if a net would be under me at the bottom.

I’ve taken probably three big risks in my life. First I made up my mind that I would no longer follow the religion my parents drilled into me for years while I was growing up. Without anywhere else or anything else in mind, I struck out on my own, spiritually speaking, and I honestly felt totally lost initially. I mean, it was all I had known for 21 years of my life, but I knew there were ways in which it wasn’t fulfilling me and I had to find out what would fill that void in my soul. It was risky because maybe there was nothing else out there. Perhaps I would fall into a spiral of depression without having the church as a safety net. But I somehow got over that first burst of fear and I found out that I don’t have to be tethered to organized religion to feel a spiritual kinship with god or with others.

The second big risk was getting married at 21 to a woman I had known a total of 3 weeks, and moving to Tennessee to be with her. For one, I had only known her for 3 weeks. Secondly, I knew absolutely no one in Tennessee besides her, so taking that leap was doubly risky. Unlike that first risk, though, the second one didn’t turn out as well. The more I was down there the further I felt disconnected from that spiritual connection I felt before, and the more I felt like that life wasn’t for me. It didn’t help that I had a hard time finding a job, that the woman I married was literally a stranger to me, and that I was disconnected from my family both physically and mentally. That experiment crashed and burned epically, but taking that risk got me where I am today.

Moving here to upstate New York was my third major risk, again knowing absolutely no one except the woman I was seeing. My mother was worried it would end tragically once again, but I felt I had to take that leap of faith because the woman I had met was worth the risk. Maybe that’s the key to taking risks vs. utilizing safety nets, how secure I feel in the situation. Even if I had fallen on my face once again it would have been worth it. That’s it right there. If I feel the risk is worth whatever would happen if I completely failed then I should do it. And luckily that third risk was the best one I’ve ever taken.

I think taking risks is a necessary part of life, but we are the ones who have to live with the fallout from the choices we make, whether good or bad. I’ve learned, though, that if we can learn even from those bad consequences then they too were worth the fall.