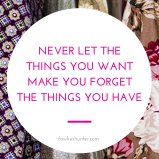 It’s interesting to me how this time of year can bring out the best and the worst in people, from those who leave packages on strangers’ doorsteps as surprises to those who say “bah humbug,” and denounce everyone who celebrates. In our house it’s a warm and fuzzy kind of time, from nighttime on the 24th through bedtime on the 25th, a magical time that is full of hot cocoa, cookies, and of course presents. We’re trying to teach our children the wonder of the holiday, but also the need to be grateful for what we already have, and for what we get.

Lexi, of course, can be quite blunt when it comes to things she doesn’t like. For example, on Halloween for several years she would go up to a house and when they had candy she didn’t like she told it like it was. “Yeah, I hate this candy,” or “This candy sucks. Got anything else?” I honestly have no idea where she got this attitude from but we have worked hard on it, and now she will simply say, “No thank you,” when offered those candies she detests. Whew. Now, if anyone had just told her the same applied to Christmas gifts…

Grandmother: Open the next one.

Lexi [madly ripping off wrapping paper]: What is it? Oh no. A puzzle! This is a horrible gift. Well, maybe it’s good for Maddie, but I can’t stand it.

Me: Lexi, how do we respond when someone gives us something?

Lexi: I was going to say I accept it. I don’t like it, but I’ll accept it. Whatever.

Me: Not “whatever.” No one had to get you anything. You should be grateful.

Lexi: Well, Maddie can have it. I accepted it. She can put it together. What’s next?

Me: That’s it, Lexi. Look at all the wonderful stuff you got this Christmas.

Lexi: But that’s all the stuff? Why isn’t there more stuff for ME?

Me: You got a lot of great stuff, Alexa. You should appreciate it.

Lexi: I do appreciate it. I just want more of it. I like stuff.

Heidi: Lexi, do you know how many people don’t have anything this time of year, any time of year?

Lexi: Yeah, a lot of people, but I do have stuff, and it’s great, but why can’t I have more?

Heidi: You’re missing the point. It’s not about the quantity of stuff you have. It’s about people thinking enough about you to want you to have something, and having the means to get it for you. It’s the thought that really counts, and spending time with people we love.

Lexi: So I have to pretend to like stuff I don’t really like because someone thought enough about me to give me the stuff in the first place?

Me: You don’t have to pretend. Just say thank you politely. You make other people feel bad when you say how much you can’t stand something they just gave you out of the kindness of their hearts.

Heidi: Yes, how would you feel if someone said something like that about a gift you gave them?

Me: Alexa, I highly doubt that. I think you would feel bad if someone hated what you gave them.

Lexi: Well, they don’t have to accept it. I accepted the puzzle so I don’t see the problem.

Me: Maybe next time she won’t give you anything for Christmas.

Lexi: Okay, okay. I’ll put the puzzle together if that makes her feel better.

Me: Yeah, you missed the entire point.

Lexi: Ooh, there’s a gift I missed earlier. What’s in that box?

Me: Yeah, you totally missed the point.

You can take your pain and turn it into your strength