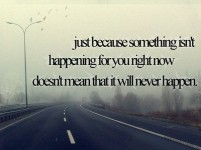 Honestly, I should be more patient than I am. I mean, I used to be more patient when I was younger. Either that or I just didn’t want to make waves so I pretended. Yeah, I was really good at pretending back then, and not so much now. Perhaps getting older cuts through the bullshit, or maybe all the years of pretending just wore me to the bone. I’m leaning infinitesimally toward the latter possibility.

I remember a time I was really pissed off at my sister because she didn’t want to play a game with me. I don’t even recall the exact game right now, but it was all important back then, because for me it wasn’t about the game. It was about just wanting to do something with my sister, about craving her acceptance and affection. So I was ticked at her because she said no, but instead of being patient about it and asking her again later I went inward and pretended it didn’t matter. But it did.

And it still does, not just with my sister, but with anyone who I find interesting. Maybe that means I come on strong when I first meet someone. I don’t have the patience anymore to just sit back and let things happen the way they will, so I try to move it along. That’s the reason I think a lot of my friends are laid back type. Maybe God is cursing me for not being patient, so he sends me people who love and appreciate me, but they also just happen to take their time to correspond, therefore further destroying my already fraying patience.

I know it’s not them, either. We all have different definitions of time, and mine just happens to be RIGHT NOW. I know I need to work on that, but the first step is admitting you have a problem, right? There should really be a 12-step program for impatients (I’m coining a new phrase for people like me) where we sit around just waiting for each other to speak. That would be a brilliant way to teach us a collective lesson, or to cause some kind of mass riot.

So I do these breathing techniques, centering I think it’s called. And while I’m doing them I feel good, like I could wait a million years for anything I want, but directly afterwards it all comes back in a rush, like a waterfall on fast-forward. And I want to just talk to somebody else about it, someone who understands because she’s been there, but I don’t know if I’ll have the patience to wait for her to show up.