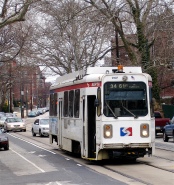 I fell asleep on the trolley once and went all the way down to the place where it turns around. I had to be awakened by the driver when we reached the end of the line, and he seemed none too pleased while he was shaking my arm and screaming in my ear. You’d think he would have been at least somewhat sympathetic, but he was not, and I had to get out right there, twenty blocks away from home. On the plus side, I did get some good exercise from the incident. And it taught me never to fall asleep on public transportation ever again. I almost kept that promise to myself, too. Almost.

A few months later I fell asleep on the subway and once again traveled to the end of the line, except this time no driver arrived to jolt me awake with a hardened face and a bad attitude. Instead the train just kept on going around and back up the line to the other end. I finally woke up halfway back down the other direction and completely disoriented about where I really was. And of course the doors had just closed so I had to go a stop further before getting off and getting my bearings.

That’s when I realized I might have a problem, and I tried to figure out what it was. At the time I had begun taking afternoon naps anyway, and I would wake up from them still feeling exhausted. What was wrong with me? My doctor said perhaps it was all the late nights I had been having. You see, at the time I was suffering through an intense insomnia that I hid from everyone. Instead of just talking about it, I instead would sit up in my room all night with my headphones on, watching horrible nighttime television, or listening to the stereo, or reading while watching horrible nighttime television and listening to the stereo.

Then I found a group that was up for staying up all night, every night, so I joined them and I got into some destructive habits that did nothing to lessen my insomnia. I became the life of the party, and I can’t even recall of of the stuff I put into my body back then, but I would be out all hours, most times even crashing at someone or other’s house and driving my mother insane. In fact, she took to putting the chain on the door to frustrate me on those early mornings I would actually show up at home. I became quite adept at using any number of implements to get the chain off so I could crash.

And I would have to be up by 8 so I could get to class, so you can see where the massive tiredness came from, but I had no way to combat my insane insomnia. No matter what I tried nothing would work, and my doctor merely prescribed me drugs that also didn’t work. I slept every single chance I got because, amazingly enough, I could sleep on a dime during the days while the nights pressed in on me, making me paranoid. Somehow eventually I got over it, though. I stopped sleeping on the trolley, and on the subway, but how did I finally do it?

I met a girl. It was as simple as that. It didn’t matter what drugs the doctor prescribed, or how bad I had begun to feel about myself, absolutely nothing stopped the insomnia like meeting a girl and having someone to dream about at night. So I slept so that I could dream, and everything changed. From then on I never once slept again on the trolley, although I did kind of miss the adventure after a while.

2 thoughts on “Sleeping on the Trolley”

You can take your pain and turn it into your strength