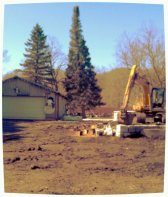 The 30-foot swimming pool stands to the rear of the property, a solid reminder of what used to be, while in the foreground stands a large yellow tractor, a solemn symbol of what now is. At the far front of the plot of land sits a mailbox, circa 1975, rusted and old, yet still serviceable, but it will never again receive mail. Indeed, within a few short weeks it might not even stand sentinel in its spot any longer, a savage slight for such a conscientious old friend.

It happened while they were out, the little family that owned so little, visiting friends for the day. And it turned out to be fortuitous because when the fire started it spread quickly, rapidly engulfing the little house long before the volunteer fire department was on the scene. Also, long before the firemen showed up to deal with the raging inferno, texts flew back and forth between neighbors and onlookers. Facebook and Twitter were alight with missives between those who saw, those who knew, and those who were just finding out. And everybody who received the messages wondered who lived there.

Purchased for a small slice of change in 1973, the land was between two ancient houses that had stood the test of time. The new owners were also new to the area, having been dislocated from their own lands by the state and given a small sum of money to go away. In retrospect, the money wasn’t nearly enough on which to live, or even to buy a comparable house to the one that they had been forced to leave. But they had to live somewhere, and the little house on the little patch of property fit the bill, or at least the bill they could actually pay. There were three of them then, an older, brunette woman, a prematurely haggard fair-haired man of indeterminate age, and a teenage boy who looked like neither of them. From the moment they moved in to the little house on the little patch of land, they were judged by the small community. How could they have avoided it?

But they persisted, even gaining a small measure of wealth, enough to buy small amenities, but not nearly enough to move to a larger

plot of land in a better community. Of course they had made their peace with this a while ago, but that didn’t stop them from prettifying the place in which they lived. Before long, by the summer of 1982, they had put in a small playground set in their front yard, and it was joined in the fall of ’85 by a second-hand above-ground pool that took up residence in their postage-stamp sized backyard. By then the boy who had moved in with them was older, and had since moved out to the garage, a place he liked to call his bachelor pad, even though it had a large wooden Frosty the Snowman nailed to the front of it. He had tried to extricate it from the garage, but he found it to be stuck fast, so he had renamed the place his ice palace.

By the time of the fire, the little house had begun to settle into the ground. At first, it was imperceptible, but by the winter of 2013 it had become quite noticeable. Indeed, the fair-haired man, who was now quite a bit older, was going to have to make a decision on whether or not to raze the house and build another, or to finally move his little family that had gotten larger in time. The older, brunette woman had since passed on, and he had mourned her for seven years, the customary time, but then he had found another. The boy who had been a teen when they moved in, and later had re-named the garage his ice palace, had also moved on, but just to a larger city 60 miles east of the small town. He never visited, and the neighbors wondered if they had had a falling out, but it was never talked about in the fair-haired man’s presence. With his new partner (they had never married) who was quite younger than himself, the fair-haired man had sired two children who looked exactly like him, a boy and a girl, both with fair hair. While both were mousy looking, they were also his pride and joy.

The four of them had gone to visit friends in the next county over on that fateful day when the pilot light on the stove in their little kitchen ignited, touched off by the dog’s inadvertent switching on of the stove while trying to get out of the makeshift pen they had made for him in the kitchen so that he would not slobber all over their new furniture. The kitchen window faced south, and he could see out of it toward the backyard, where the pool stood, covered in a sheen of fresh snow that was somehow incongruous to the scene. He wanted to go out, and had been in a frenzy when the fatal mistake occurred. Once the pilot light ignited, setting the wallpaper on fire, the house became a tinderbox. Luckily for the canine, who the children had named “Leroy,” the chaos he had caused gave him renewed strength and he pushed through the barrier and ran out the back door while the fire raged inside. No one had heard from him since, but at least he

had made it to safety. It would take the firefighters several hours of digging through rubble before they finally realized the remains of the dog would not be found in the house.

The fair-haired man found out from the television, a quite surreal way to discover one’s home is no more. He wept when he realized the futility of his efforts to not only maintain, but to enhance his little corner of this world. And when he returned to the scene, he found the yard full of mud and soot, the house a rotted husk of its former self, and the plot of land cordoned off by orange tape that said, “Do Not Cross.” So he did not cross, but before he went to the neighbor’s house to reunite with his family and determine their indeterminate futures, he checked the old, rusty, familiar mailbox… and found his final mortgage bill waiting for him there.

2 thoughts on “The Little Patch of Land”