Fourteen is a daunting number, not just because it’s over 10, or that it’s beyond lucky number 13, or even that it’s a full twice that of 7, but because so much can happen over the course of 14 years. Fourteen years ago I was 26, no longer a kid but still not entirely secure … END_OF_DOCUMENT_TOKEN_TO_BE_REPLACED

Okay, so I’ll admit I hadn’t really jumped on board with all of the challenges that seem to have exploded over the internet in the past few years. All this bandwagon stuff, and whatnot. So I wasn’t dumping ice water all over myself back in 2015 even when it seemed like everyone else was. There’s … END_OF_DOCUMENT_TOKEN_TO_BE_REPLACED

Marriage is not easy, and anyone who says it is, well, they’re a liar, or at the very least delusional. I mean, imagine it. You come from two different places, with a series of experiences that have shaped you individually, with a wealth of preconceptions and idiosyncrasies that don’t just go away. Instead, you come … END_OF_DOCUMENT_TOKEN_TO_BE_REPLACED

Step 1: Attraction. Maybe it’s subtle at first, but something is definitely there. She returns the gaze, you approach, and start a conversation. Step 2: The First Date. You sweat through your deodorant waiting for the clock to hit the hour. So you can pick her up and head to somewhere where you will talk … END_OF_DOCUMENT_TOKEN_TO_BE_REPLACED 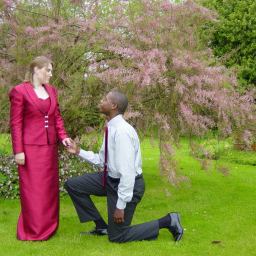 “Darlin’, I feel like a god when I am next to you. Something sacred, someone straight and true. Tell me do you feel the same way too?” ~Live 13 years ago I met the woman of my dreams — literally. For years I had dreamt of someone who could accept me for the eclectic man … END_OF_DOCUMENT_TOKEN_TO_BE_REPLACED

Every marriage has its ups and downs. You know how the wedding vows go. “For richer or for poorer, in sickness and in health, for better or for worse, ’til death do us part.” Often times we deal with the richer or poorer aspect. You lose a job and you both have to adjust. Or she wants to start her own business and you are supportive. The sickness and health part of the deal is also fairly consistent, since as human beings we get sick, and our partner is there to take care of us, but it can also apply to major illnesses that we might not have prepared ourselves for, the ones that suddenly spring up and we deal with them. Because that’s what we do once we’ve entered into the contract of marriage, right? It’s right there in the vows. But the biggest one, and of course the one that’s also the most vague, is the one about for better or for worse. What does that really mean?

I got married 10 1/2 years ago, so I’m a little cloudy on exactly what was said during our wedding ceremony (please don’t kill me, honey), but I’m certain our vows were pretty much like the ones I outlined above. And  I know we’ve definitely gone through the “for better or for worse” part. I also know there’s more of both to come, and I’m more than okay with that. I’m of the opinion that you should always go into anything you do with both eyes open, but if you happen to slip up and close one of them, once it’s open again you figure out where you are and where you’re going. You don’t bail just because it’s not what you thought it was going to be. Who knows? It might end up being better than you thought it would be.

Let me get this out of the way first: I come from a divorced home, and I myself have been divorced, so I know what it’s like when there is more “worse” than “better,” when people can’t reconcile themselves to those vows and there is no other recourse. I don’t judge either of those dissolutions because I know there were extenuating circumstances in both. I judge myself for that initial marriage in the first place. It was something that should never have happened, but the divorce itself was a righteous one. My parents’ relationship, too, was irreconcilable, and although that was sad for me at the time, and on some level I’ve never gotten over it, I know that it was best for both of them in the end.

I’ve never been the best at relationships, and for a long time I blamed my dad for that. I wouldn’t get too attached to people because I always worried they would leave me high and dry. So, being distant was a state of existence for me. END_OF_DOCUMENT_TOKEN_TO_BE_REPLACED