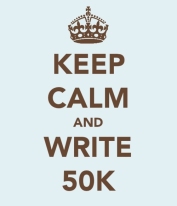 Writing is a process. I’ve always thought that, but it’s only been lately that I’ve honestly tried to pick it apart, at least my own process. That’s because up until 2012 I hadn’t focused on writing larger works. I had been content with shorter pieces like short stories and poetry, which didn’t require too much picking apart. But to write over 100 pages of prose requires a breaking down of plot in a way I had never thought of before.

And every November I put that process to the test, participating in NaNoWriMo (National Novel Writing Month). Some years I go into it unprepared, waiting for the muse to take over after I’ve already started the story, and others I come in with a character list, a plot summary, and an ending already mapped out. Either way, however, I put the process to the test. It looks something like this…

This year I had absolutely no idea where I was going to go with my story. All I knew was that I had a male protagonist, that I was going to write in third person, and that my goal was 2,000 words per day. So far, through three days of NaNoWriMo I have a male protagonist who has already run into a couple of surprises. I have been writing it in a present tense, third person narrative. And I’ve hit my 2,000 words per day. It only gets harder from here, though.