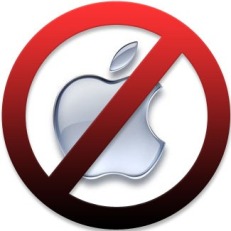 I used to love Apple. When I first found out that iPods were a real thing, that I would be able to have a ton of songs on one device and listen to them all the time, even shuffle them around so that they were random, that was a dream come true. Sure, I had to shell out $400 bucks for one, but it was totally worth it back then.

All I had to do was plug it in to my computer, watch it show up in the iTunes tray, and load it up with albums upon albums. It was so easy.

If I had only read the Apple message boards first. Things went fine for a few years, my iPod loaded like clockwork, and I was able to add more and more music to my collection. But then… it crashed. Not my computer, which was still running just fine. My little previously perfect device went kaput, erasing every single song in its mainframe.

But I wasn’t deterred. Quite the contrary. I was excited for a chance to restore it to factory settings (a convenient feature on iTunes), to reload all of my music, and to have an even better experience after the reload than I’d had before it. And things were fine for a few months after that. I was able to reload everything, to listen to my library of music, and to add more as I added to my CD collection.

Then it crashed again, and I realized it wasn’t my fault. I realized that this little thing IS too good to be true. Sure, it can hold a ton of songs, but once it crashes it is never the same again. I was able to reload all of my songs again, but I could tell it was different. Some songs began to cut out early in the playback. Some songs would get skipped altogether. And some songs refused to even be loaded onto my iPod, no matter how I manipulated the files.

So I bought another iPod, thinking that I just needed a fresh infusion.

This one lasted three years before it too crashed, and it too has never been the same since, no matter how many times I restore it, no matter how often I reformat it, and no matter how much I swear at the iPod or my iTunes, wishing it to be different. So, that’s it. I officially hate Apple. They have officially turned my absolute adoration for their product to a severe distaste for their ironic lack of ingenuity.

I propose that Apple replaces all iPods that have crashed with entirely new ones. Every single time one crashes. I seriously almost flicked this one across the room at its latest crash. I’m almost ready to go back to copying songs off the radio. At least I know that audiotape won’t die unless I wear it out with excessive play. Now where is my damn Walkman?

3 thoughts on “I HATE APPLE”