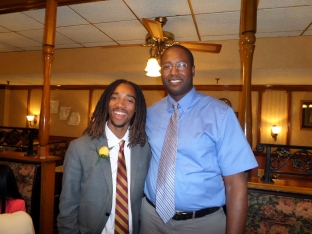 A little over a year ago my nephew graduated from a prestigious high school just outside of Philadelphia, and we took a trip down from upstate New York to be a part of the festivities. It was a wonderful trip in the car with competing sounds.

You see, I have to listen to my music while I’m driving so I plugged in my iPod, turned the knob so it only played through the front speakers, and settled back for the ride. From the backseat, though, came the video game sounds of Sonic Dash from Madeline, and the video of Pink Panther & Pals from Alexa.

The miles flew by as they often do, and as I listened to The Cranberries, punctuated by backseat laughter, I thought back to the early days, when my nephew was two years old and loved watching The Wizard of Oz for its musical score. I thought of the many miles he had come from that young child to a young adult facing a brave new world.

Then we were there, and the ceremony was an exercise in trying to get the perfect snapshot. A new camera with a zoom lens helped somewhat, and I got a few photos that were worth something in the end. The family was there: my mother, my uncle, my aunt, my other aunt, and my sister (the proud mother who worked so hard to make sure that amazing moment would in fact arrive). We enjoyed the ceremony, and it even brought back memories of my own high school graduation twenty years before.

This snapshot, though, was from the party afterwards. It was taken by my wife who insisted we get a photo of me and my “buddy,” and I’m glad she did, because while having a ton of photos of group shots is great, having one picture of just the two of us makes me feel like I was a part of the festivities, but even more so a part of his life. That day was magical on so many different levels, and I would remember it like it was yesterday, even though it was over a year ago, even without the photo. But the photo provides visual context, and I smile when I see it.