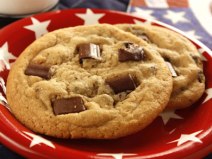 Mmmmmm. There’s no better smell than the scent of freshly baked chocolate chunk cookies, directly from the oven. You know the ones, with huge chunks of chocolate instead of those tiny chips, chunks that spread out in the rising heat of the enclosed environment, making the cookies moist and soft. When I’ve finally stopped smelling them and place them in my mouth they almost seem to melt like snow on a sunny day. And they taste so good, smell being simply a precursor to taste, as it so often is.

When I was a child I remember my mother making oatmeal raisin cookies, and while I liked the taste, the smell wasn’t quite as entrancing as chocolate. There’s something to be said for that sickly sweet smell that just reaches out and drags me in, making me its slave. Semi-sweet morsels that were missing from those ubiquitous oatmeal raisin cookies. I would often beg for her to put chocolate chips in instead of raisins. To no avail.

Then there was Hershey Park. Growing up not two hours away from the chocolate mecca had its privileges, though we didn’t make it there nearly as often as I would have liked. From the moment we opened the car doors after parking, though, the smell would assault our senses. I felt like I was coming home.

But then it quickly got overwhelming. Once we were in the park for over an hour the sweet, enveloping smell of the chocolate began to push out all other smells, and all other thoughts. It became the epitome of “too much of a good thing,” and I couldn’t believe I was starting to dread the smell. I wanted to leave the park right then because it was ruining my appreciation for that delicious smell. It was destroying my favorite smell, and I couldn’t let it. So I got some cotton candy instead and just held it in front of my face, breathing it in when I felt slightly nauseous from the chocolate.

It helped, and I made it out of the park alive at the end of the day with my love of that precious chocolate smell still intact. Thank God for cotton candy, I thought, as we got back into the car and headed home where the right amount of chocolate existed in a sequestered environment, where it belongs. Some day I will return to Hershey with my children, but they will be prepared for the overloading sensations of chocolate everywhere, and they too will survive.

And now I make my own chocolate chunk cookies (with extra chunks), and I bake them for a longer period of time at lower temperatures. It makes for a dazzling combination of sweetness in the end, but it also teases out that smell, making it last longer as well, filling the entire downstairs with the smell that reminds me of all things good and precious. It reminds me of that perfect love that has endured lo these many years, and that will endure throughout the rest of my life.

Now, if I could just find a good recipe for chocolate chunk brownies…