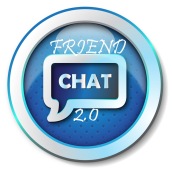 I’ll be the first to admit that I wasn’t always a good friend. There was a time in my life when I was so incredibly selfish that I took advantage of people who I called friends, telling them what I thought they wanted to hear, making them feel special for the moment, and then forgetting all about them when the next one came around. Oh, and did I mention that during this time most of my friends were of the online variety? Or that I was 19 back then?

When I was 19 I was in a state of flux. College was on hold but I was still working at the campus library, I was still able to use my college ID to get into the computer labs, and no one had canceled my email accounts so I was all set to talk to people from all over the country, and indeed all over the world. My friend Anthony had gotten a hold of some pirated internet chat software called Homer. I’ll never forget it because it had a drawing of Homer Simpson on it. He gave me a disk and kept one for himself. And I was in business.

Now, you might not know how things were on the internet back then, still in its early stages, but it was all about messageboards, actual email conversations, and places called chatrooms. A chatroom was a place you could connect to at any time of day or night and others would more than likely be there… chatting. I was fascinated by chatrooms when I first found them. There were just so MANY of them it was daunting at the start, but then I got totally into it. At my apex I was spending up to eight straight hours sitting in a chair at an old-school Mac with the Homer disk in talking to people from all over the place.

I made so many friends it was incredible, and I called them friends, not “friends.” I mean, I spent more time talking to them through IRC (internet relay chat) than my own family, and my two real life friends. It was so easy, being so far apart from them, to embellish things about myself, and before long it was impossible to tell the real me apart from the various versions of me that I created to suit each other person. Then I started emailing them. They wanted to talk apart from chatrooms so I obliged. I began getting and sending a cubic ton of emails.

Then the phone calls started and I really couldn’t keep things straight. Which name did I use? What did I tell them about me? And so many of them wanted to meet, to hang out as if we were actual friends. I gave in with a group of friends I met from an internet mailing list for a band we liked, and maybe that’s why I gave in, because I wasn’t pretending to be something I wasn’t with them. The others, whenever they brought up meeting I blew them off. There was no way I was going to be able to keep up my pretenses that way. So I made up excuses.

Years later, after I had stopped talking to every single one of them (it was mostly cold turkey in 1998), I wondered what had become of those friends I had made so long before through the miracle of the early internet and those random chatrooms. I found a way to a few of those chatrooms again, but no one I knew from back then was there. I guess they had moved on as well, to bigger and better things, and I hoped they remembered me fondly, but I had a feeling they didn’t. Maybe they had felt that our friendship was solid, and felt let down when I had in effect disappeared. I just hoped they didn’t hate me because of it, even though I had never really been real with them.

Then, two weeks ago, one of them contacted me again. It was incredible, really. And I’ll admit I was apprehensive because I didn’t know in which camp she fit. I had heard all the stories about angry people who had never had closure who tracked down the ones who had wronged them and gave them the what for. But it was nothing like that at all. In fact we’ve gotten to know each other and are becoming real friends, not the me she thought she knew back then who didn’t even give her his real name and hid behind the screen, but the me who has grown up and recognizes how important friends are now.

It’s me, Friend 2.0, no illegal Homer IRC disk necessary. And it feels good, to know that, with at least one person from back then, I’ve somehow made amends for the lies, and for the disappearing act, and we’re actually becoming friends now, some 17 years later. It feels really good. But she’s beating me in Words With Friends. I can’t let that continue.