Well, if you didn’t know by now, I work at Target, one of the largest retail stores in the world, and the biggest message the store has is all about keeping it brand, making sure we are always representing the Target brand of consistency, attitude, and efficiency. Being fast, fun, and friendly, that’s the Target way. Don’t worry. I’m not going to sound like an infomercial. This intro was just for all those who haven’t read any of the previous installments in the series.

So, I’ve noticed for a while now that coupons seem to be popping up all over the store, and at first I put it off as people being sloppy, dropping them inadvertently, then walking away without realizing it. Then, though, I started looking more closely at the coupons, and I realized they always showed up near the items represented in them. For example, I found a coupon for nail polish in the Maybelline section (don’t ask me what I was doing over there since I’m a food specialist). Then I found one for bacon between two packages of bacon (I was checking for dates, okay?) and I knew there was a pattern to what had previously seemed random. Finally, I took a look at the expiration dates on the coupons I found (this was my new experiment), and it hit me like a sack of potatoes. All of the expiration dates I found were within a week of me finding each one of the coupons.

Then today I talked to a colleague (I don’t get much interaction with my colleagues while I’m going about my regular day but she happened to be nearby) and I posed the question to her about the coupons appearing like they did. She laughed at my naivete, telling me this wonderful tale about people known as coupon faeries. Now, if you happen to be one of them, I want you to know she was only laughing at my stupidity, not at you being a coupon faerie. As a matter of fact, she had known about the existence of coupon faeries for a long time. Apparently it’s common across this thing known as social media that I somehow seem to miss (but I somehow always catch the annoying goat videos). These are people who leave coupons in stores on purpose on or near the items on the coupon for 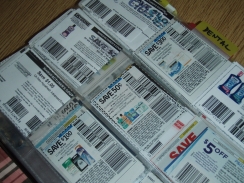 others to notice, pick up, and use. I suppose it’s a sort of “paying it forward,” good samaritan work designed to gain a rung or two on the good citizen ladder. And I think it had been a long time coming. If you’re not going to use a coupon, why let it expire and then throw it away? Now, if only I could catch one of these faeries in action!

Speaking of coupons, apparently the ultimate couponing shows are back on the air because I have seen an awful lot of people in the store lately with these huge binders full of coupons and with a mission to complete. And don’t hit me, but every single time I’ve seen one of them, they’ve happened to be ladies. Now, don’t tell me it’s because ladies are the ones who do the shopping. I see plenty of guys in there by themselves doing the shopping and none of them have the binders. Maybe they don’t like the idea of the major fashion accessory and they’re hiding coupons in their parka pockets instead, but regardless, I don’t see them with coupons. The ladies I see sporting them know exactly where everything is, exactly how much of each product they will get, and they know how to double up on those coupons. Then they get to the check lanes and they hand the cashier about 30 coupons for their 10 products. One time I even saw someone get back money after one of these transactions. I have to say that if you’re going to spend so much time out of your life finding, cataloging, and bindering (word?) these coupons, happy trails to you.

Keeping it Brand: The Archive

2 thoughts on “Keeping it Brand, Part 9”